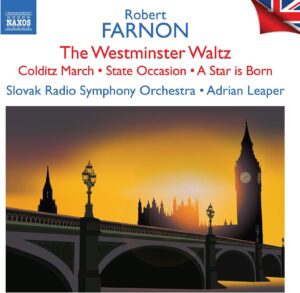 Naxos returns to its Marco Polo back catalogue with one of the giants of British Light Music (although the composer was born in Canada) with this collection of favourites by Robert Farnon. Alongside the titular Westminster Waltz, we also encounter Portrait of a Flirt, which showcases the composer’s trademark close string harmony, Manhattan Playboy, Derby Day, Jumping Bean and Peanut Polka. It also includes some of Farnon’s most beautiful compositions with Au La Claire Fontaine and How Beautiful is Night providing relief from the antics of some of the aforementioned pieces. Au La Claire Fontaine, as it is well known, was written as one half of a diptych of tone poems that employed stylistic points from Light Music in the context of a larger form. The other half of this duo is also included on the CD with Lake of the Woods, but where the earlier piece has a tremendous sense of atmosphere that builds to a sweepingly romantic conclusion, Lake of the Woods seems somehow to lose its inspiration and becomes rather meandering, without the memorable themes of its musical partner. Farnon would, of course, further explore applying his particular Light Music voice to a larger work in the form of 3 ambitious symphonies, the second of which was recorded by John Wilson (who also recorded one movement from the first). As with the previous release conducted by Leaper, my problem remains that while some of the interpretations on the recording are genuinely exemplary (including Au La Claire Fontaine, one of my all time favourite Light Music compositions), others are somewhat insipid and lacklustre, such as the Colditz March, which works well as a stirring opening to a TV show, but sadly falls flat here. The same can thankfully not be said of the fabulously uplifting renditions of Jumping Bean and Derby Day, which I’m sure will lift the spirits of any listener. The other real selling point for this disc is the variety of music on display: from the best known of the composer’s output to a handful of lesser known, but excellent pieces including Peanut Polka, Little Miss Molly, A Star is Born and Pictures in the Fire. All of this provides a handy overview to a multifaceted composer, who applied an individual style to a variety of contexts. The music bears some superficial comparison to Mantovani, as was interestingly noted in a review from Musicweb, but the comparison only really extends to their being two composers who happened to write very distinctively for strings. Where Mantovani excels in “cascading strings”, Farnon perfected a style typified by stacking close harmonies and moving them in parallel as an accompaniment to a melody (frequently voiced on both the top and bottom voices of the instrumentation). Much of this method is on display on this re-release making it a superb starting point for anyone interested to explore Farnon’s output. If you’re reading this as a member of the Light Music Society or Robert Farnon Society, however, I expect you’ve already done so! DA