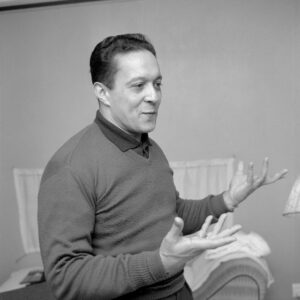 Pioneering conductor Everett Lee has died at the age of 105. Lee rapidly rose to prominence when he was asked to fill in for the conductor Joseph Littau in the Broadway production of Carmen Jones. Leonard Bernstein heard the performance and immediately approached Lee to be permanent conductor on his musical On the Town. Lee accepted the position and in 1945 became the first African-American conductor to conduct a Broadway show. In the 1950s, he became director of Columbia University’s opera department and was guest conductor with the Louisville Orchestra, making him also the first African-American conductor to conduct a white symphony orchestra in the American south. It wasn’t all plain sailing, however, and Everett Lee was regularly greeted with open racism in America, Oscar Hammerstein II warning him that southern theatres would refuse to accept a black conductor when his shows toured. Concert manager Arthur Judson proved Hammerstein’s warning to be correct, telling the conductor “I do not believe in Negro symphony conductors”! The level of unfiltered intolerance pervading the US prompted Lee to move himself and his family to Europe, feeling they might encounter more opportunities for serious work. The calculation proved correct, as Lee then spent ten years working as chief conductor of the Norsköpping Symphony Orchestra in Sweden. Visits to the US were frequent, with Everett conducting Opera Ebony, American Symphony Orchestra, Symphony of the New World and New York Philharmonic. Lee officially settled in Sweden and it was in Malmö that his extraordinary life came to a close. DA