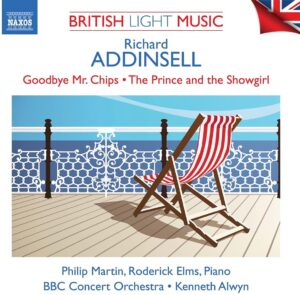 A welcome re-release in Naxos’ British Light Music collection, presumably in tribute to the recently late conductor Kenneth Alwyn. This compilation brings together many of Addinsell’s best loved pieces including, in addition to the ones in the disc’s title, Invitation Waltz, Tom Brown’s Schooldays and A Tale of Two Cities. Interestingly, it does not include any mention of the renowned Warsaw Concerto, though I must admit, at the risk of being unpopular, that this best known work is actually one of my least favourite Light Music works.

There are other tracks included here, however, and there is a concerto; in this case the charming The Smokey Mountains for piano and orchestra. Pianist Philip Martin ably turns his hand to the piece, which, while it does have a hefty serving of Rachmaninoff-inflected cheesiness in the first movement, is still a work of considerably virtuosity and originality. The central Valley Song movement is wonderfully bluesy and evocative of American folk music, while the concluding movement introduces the sound of the banjo into the orchestral texture for lively and fitting finale. Separately, the three movements of this work stand up very well, even if the concerto as a whole does rather lack cohesion. It is thoroughly entertaining and played with great aplomb by all performers.

Addinsell did not orchestrate very many of his own works, so we are treated here to superb reconstructions, arrangements and orchestrations by Philip Lane, Roy Douglas, Felton Rapley, Douglas Gamley, Leonard Isaacs and George Zalva [Cruikshank]. I particularly enjoyed Philip Lane’s arrangements and reconstructions (with his characteristic flair for musical wit and insight) as well as the mysterious and hauntingly beautiful Isle of Apples arranged by Roy Douglas. The piece is doubly mysterious, as it was never performed in the composer’s lifetime, only being discovered shut inside another piece of music after he had died. The concerto and a couple of other tracks, meanwhile, are Addinsell’s own orchestrations.

Roderick Elms joins the BBC Concert Orchestra as soloist for two tracks Tune in G and A Tale of Two Cities, though in the former the piano is only briefly prominent as a solo
instrument (including a virtuosic cadenza), more often being deployed as a part of the orchestral ensemble as a whole. That said I would still hesitate to call it an “orchestral piano” part. Tale of Two Cities, on the other hand, is far more reminiscent of the Warsaw Concerto in relation to the piano writing. Elms, like Martin, is clearly the right man for the job when it comes to this kind of music, not just in pianistic ability, but understanding of the music.

The BBC Concert Orchestra, as one would expect, play exceptionally and the remasters are welcome, as it does sound refreshingly “up to date” in comparison to other more dated recordings. Highly recommended. DA