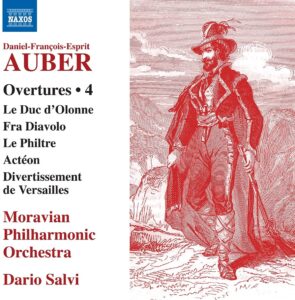 The work of Daniel Auber is enjoying something of a renaissance thanks to the efforts of Dario Salvi and the Moravian Philharmonic Orchestra and this fourth volume in the orchestral works of the French composer I’m sure will not disappoint those who have followed the series so far. The standard of recording has been pretty consistent since Salvi’s recordings of Blindekuh by Johann Strauss II and his Humperdinck compilation, so I’m more confident in saying that volumes 2-4 of the Auber music are very fine introductions for anyone keen to explore the works of this fascinating composer.

Along the way in this compilation, you will encounter a couple of aspects to Auber that have appeal beyond the opera stages of Paris. La Fête de Versailles”Divertissement de Versailles” showcases Auber as a fine mimic as well as a fine composer in his own right. The work, in several brief movements, but presented here in one continuous 25 minute track, gleefully combines court musical styles along with early music and folk styles of France, with no shortage of Auber’s trademark bonhomie and humour. It is a delightful listen- for me, the highlight of the whole disc- very well played and interpreted by musicians who have a clear grasp of the myriad musical influences. As is so often the case with Auber, his music has a clarity of thought and the interpretation avoids the obvious pitfall of being overly indulgent with the tempi and textures.

The other standouts are undoubtedly the excerpts from Fra Diavolo, one of Auber’s most popular operas, full of melodies that are memorable as well as pleasing to the ear. Other recordings of this work are, of course available and it is worth noting that Salvi’s interpretation is very much in the direction of trying to capture a sense of authenticity in order to create a recording of some historical accuracy, so you won’t find anything over-the-top here, but you will get a very refined rendition.

Perhaps it is over-exposure to Auber’s music having followed this series from its inception, but other aspects of the music struck me as far less impressive on this recording. Not all of Auber’s output is of equal quality and that does show here in pieces such as Le Duc d’Olonne, which, while well wrought and skilful, has none of the melodic inspiration found elsewhere in the composer’s output. Ultimately, much of the music, aside from the highlights I mention has a far more “disposable” feel to it, but it is still welcome to have these recordings as historical documents, even if, at 80 minutes, the compilation also rather outstays its welcome. Reservations aside, however, this is still a most valuable addition to the French classical music enthusiast’s library, especially for those who gravitate to music of a lighter manner.