MANHATTAN TO MONTMARTRE: GERSHWIN AND BERNSTEIN 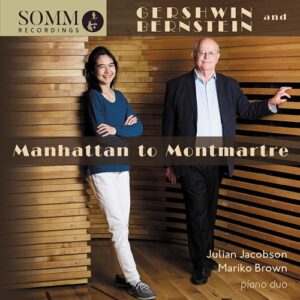 Recorded in August 2020, this is another non-orchestral release possibly brought about by the Covid lockdown – and another successful foray into our kind of music for the enterprising award-winning Somm label.

It would be surprising if there were more than a very few of those reading this for whom the music is unfamiliar.  To begin: just under 22 minutes are devoted to the brilliant Symphonic Dances from ’West Side Story’.  The version here is for two pianos made by the American composer and pianist John Musto in 1998.  Leonard Bernstein’s score is such that it can be appreciated in any instrumental form.  I am struck once again by what a beautiful tune Somewhere is.

The three works from the pen of George Gershwin – he died in 1937 aged only 38 – are all arranged for four hands on one piano.  Best-known is Rhapsody in Blue, which uses a transcription made by the musician Henry Levine in 1943.  It is fascinating to learn from Robert Matthew-Walker’s booklet notes that the European premiere of the work was in Paris in 1928 played by the Russian-born Dimitri Tiomkin.  He was, of course, to become a major composer of film music (‘It’s a Wonderful Life’, ‘High Noon’, ‘The Alamo’, ‘Friendly Persuasion’, ‘The Guns of Navarone’ and The High and the Mighty’, et al).

The two remaining Gershwin classics were transcribed by Julian Jacobson in 2014 and 2016 respectively and are receiving their first recordings here.  Although less well-known, Second Rhapsody was considered by the composer to be the finest thing he had written.  And he described An American in Paris as “the most modern music I’ve attempted”.  There is sparkling pianism through the whole disc.

The piano duo of Jacobson and Brown was formed in 2011.  As well as their performances in London and around the country they have appeared regularly in France including Paris.  Julian is a Professor at the Royal College of Music and Royal Birmingham Conservatoire, and Mariko has been Musical Director for productions in London and Suffolk as well as a teacher, currently at the Yehudi Menuhin School.

Of interest to piano playing readers: the instruments used are the Steinway Model D (Julian) and Fazioli F278 (Mariko) for the Bernstein, with the Italian model for the Gershwin.

This album has been a constant in my CD player since I received it for review and is a 5-star recommendation.