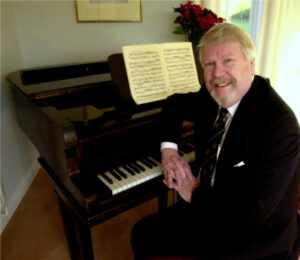 John Manley Morehen was born in Gloucester and was the foundation Organ Scholar at New College, Oxford. He also studied in early life with Herbert Sumsion at Gloucester Cathedral. He also spent a semester studying at the College of Church Musicians at the National Episcopal Cathedral, Washington DC and following his graduation from Cambridge, he returned there are a lecturer. In 1968 he was appointed Sub-Organist at St George’s Chapel, Windsor where he was organist for many royal and state occasions. He later taught at Nottingham University, eventually as professor. Morehen’s main interests lay in 16th– and 17th-century music and he was involved in many major editorial projects on this subject, as well as the memoirs of A. Herbert Brewer, Sumsion’s predecessor at Gloucester. He was also a composer, his compositions comprising ceremonial fanfares, Christmas carols and anthems, and he was a JP for Nottingham from 1992–2011.