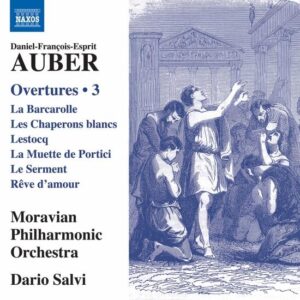 Continuing the multi-CD celebration of Daniel Auber’s music, Dario Salvi returns to the Naxos label with the third volume of overtures from Auber’s vast operatic output. The present release focuses on Auber’s more mature works in the genres of Opéra-Comique and Grand Opera. These are works of historical as well as musical interest, with the premiere of La Muette de Portici (a tale of the revolution of Naples against the Spaniards), which prompted riots in 1828, which in turn led to the Belgian fight for independence in 1830. It is also significant as the first cited work within the Grand Opera genre in music history.

First things first: as far as Salvi’s Auber series is concerned, this is the best to date on all fronts: performance, recording quality and indeed the standard of these more mature musical works. The orchestration represents a considerable expansion of forces for the composer, as if as more opportunities presented themselves, the more he explored and broke with convention. This is perhaps an example of Auber unleashed! Some familiar traits are present such as virtuosic writing for double woodwind, which features a great deal here, as does the use of the extreme upper ranges of the bassoon.

The curtain raiser (of many curtain raisers here!) is not in fact an overture for an opera, but instead commissioned for the Great Exhibition of 1862, held in Kensington, for which Mayerbeer, Verdi and William Sterndale Bennett also wrote music. There is, in fact, a hint of Verdi in this music, but tempered and refined as we tend to find in Auber’s music and without perhaps the unbridled passion of some of Verdi’s works. An arresting, if conventional, opening is quickly followed by far less conventional central ideas, boasting very memorable melodies, along with some quite surprising dissonances along the way. All of this reaches a head in a rousing culmination, which would suit any festive occasion.

The influence of Verdi raises its head once more in the overture to La Barcarolle, ou L’Amour et la Musique, which does get off to a slightly “rum-te-tum” start, but does so with style and a pleasant hint of humour. This is also coupled with a lightness of touch and transparency of orchestration, which suits it perfectly to the Opéra-Comique form (and indeed the theatre in which it premiered). The Act 3 prelude is also a real gem of restless energy. Les Chaperons Blancs only ran for 12 performances and as much as it pains me to say it, I can see why. The music is every bit as well crafted as one has now come to expect of Auber, but just doesn’t hold the listener’s attention musically. Meanwhile Lestcoq ou L’Intrigue et l’Amour is something completely different, boasting a superb overture (in my view one of the finest on the whole disc) and overflowing with melodies, starting with a mournful oboe over plucked strings which gradually transforms into a truly thrilling allegro finale.

La Muette de Portici was a runaway success for Auber, which, with multiple revivals, was performed over 500 times in just under 20 years. Everything about the excerpts screams an attention-grabbing grand opera on a large scale, and it is quite rightly considered the composer’s masterpiece.

While not perhaps on the same level as La Muette, the overtures from Rêve d’amour and Le Serment, ou Les Faux monnayeurs, also demonstrate Auber as the successful composer at the height of his powers. The composer was over 80 when Rêve was premiered, and the music still boasts a sense of sunny optimism throughout, while Le Serment’s overture reaches heights nearly on a par with La Muette and Lestcoq.

After concerns about the dry acoustics in Salvi’s earlier Auber releases, I’m happy to say that the technicalities of grappling with Auber’s unusual timbral world have been perfectly achieved here. The orchestra plays with drama and sensitivity throughout, while Salvi’s attention to detail, particularly in following Auber’s tempo markings absolutely to the letter, render this a recording of historical value in addition to being a highly satisfying listen. I did think one or two of the entr’actes felt a little like filler and left me wanting to hear recordings of the complete operas of pretty much everything on the disc – but maybe we’ll have Salvi to the rescue yet on some of the unrecorded works! This volume in particular is a great introduction to the now neglected works of Auber, showing his musical variety in successful and less successful works and having seen the development of the series from rather shaky start to this release, I have no hesitation in highly recommending this for lovers of melodious and exemplarily constructed works. Whatever my reservations about the earlier releases, this time it’s a knockout!