THROUGH THE CRYSTAL- A 90TH BIRTHDAY CELEBRATION, PETER HOPE 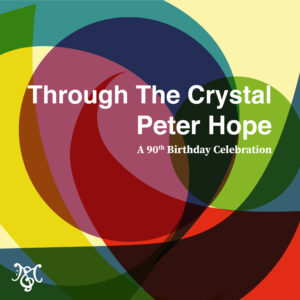 This two-CD set has been released to coincide with the ninetieth birthday of composer Peter Hope on November 2nd 2020. It owes its title to the first track of CD 1, and comprises recordings of his compositions for Mozart Edition made between 1965 and 1980.

Peter Hope was born in Edgeley, Stockport, Cheshire – now part of Greater Manchester – and studied music at Manchester University and the Royal Manchester College of Music.

After obtaining his degree in the early ’50s, he moved to London and quickly found himself working alongside Ernest Tomlinson – who at that time was chief arranger for Mills Music – as a copyist and arranger. In those days, of course, everything had to be laboriously handwritten, and he spent two years copying-out the scores of ET and others – and learning a great deal in the process ! As he somewhat wistfully observes in the booklet notes, ‘This was still a time when Light Music was very popular’.

In 1958, he ‘went freelance’ and had his first big break making arrangements for the BBC Concert Orchestra. Two of these remained in the orchestra’s core repertoire for a long time – ‘Mexican Hat Dance’ and ‘Marching Through Georgia’. They would continue to be regularly heard on radio broadcasts, and were also performed by other BBC ensembles – e.g. The Midland Light Orchestra.

He began to work extensively with the British arm of Mozart Edition, advising on musical repertoire and making arrangements and soon realised that ‘I could also be writing stuff’. The Momentum Suite for strings – recorded and issued some years ago by Naxos – was one of his first compositions, and the Ring Of Kerry Suite – included in this set – soon followed. This is arguably Hope’s most well-known opus and deservedly won him an Ivor Novello award.

Both compositions are written in what could be described as the ‘traditional British Light Music style’ and there are very occasional ‘nods’ in the direction of Ernest Tomlinson and Trevor Duncan.

Peter Hope also started to write library music, and in fact the majority of the fifty-eight titles in this set fall into the latter category. The BBC required suitable music to accompany the Test Card, which was broadcast daily until the introduction of daytime television. Mozart Edition was renowned for its marketing expertise, and several of his pieces were found to admirably fit the bill.

In the early ’70s the Corporation launched its ‘CEEFAX‘ service – in its day, a forerunner of the information provision found on today’s Internet – and again a significant number of Hope’s works were selected to be regularly heard behind the text pages.

These compositions became very familiar to many people who switched-on their televisions just to listen to the music; their popularity was such that the BBC often received queries about their identity and availability. This generally prompted the terse and unhelpful reply , ‘It’s not available to the general public’. Happily, times have changed, and these delightful miniatures can now be enjoyed by a wider audience!

Listening to these pieces, I continue to be struck by the extraordinary versatility of Peter Hope’s compositional skills. The titles cover a broad range from light classical, jazz and big band, folk, to pop and easy listening. To create so many disparate styles requires a lot of imagination and ability – and probably the burning of a great deal of midnight oil as well!

The CD set comes complete with original artwork [and booklet] by Peter Hope’s daughter Amy and includes an exclusive interview with the composer. No information is provided regarding the recording locations, but I believe that many of the sessions took place in Munich, Germany.

THROUGH THE CRYSTAL is a wonderful testament to the creative musical talents of Peter Hope, to whom we extend our congratulations and very best wishes on his 90th birthday. It is highly recommended to those who particularly enjoy this sub-genre of Light Music.

Copies may be obtained direct from Mozart Records – www.editionuk.co.uk