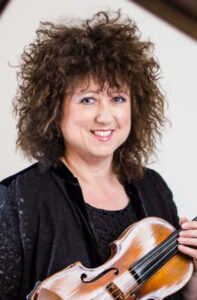 Marianne Olyver, violin, was the first girl to be invited to lead the National Youth Orchestra of GB. She studied with Max Rostal, Yfrah Neaman, Alfredo Campoli and Emanuel Hurwitz CBE. She then went on to be a solo violinist, guest Principal with The Philharmonia Orchestra, teacher at the Junior Royal Academy of Music, International Examiner for the ABRSM and Director of YSE, Pro Corda London Saturday School.

Marianne has both broadcast and performed at festivals and major concert halls both in the UK and abroad. Her guest appearance on Woman’s Hour, where she performed live, was voted BBC Radio 4 Pick of the Week

Postcards from Europe, her violin and piano duo specialises in researching and playing virtuoso gypsy music and works by composers all of whose lives were affected by the Rise of the Third Reich:

‘Stunning… the thrill of the week …. the dizzy violin of Marianne Olyver shone brilliantly ‘ The Independent