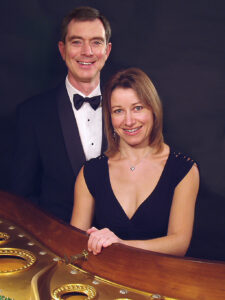 The husband and wife piano duo, Joanna Smith and Roderick Elms, have appeared with the Royal Philharmonic and the BBC Concert Orchestras and on both BBC radio and television.

Joanna Smith has a busy career accompanying for concerts, auditions and exams, as well as for masterclasses with some of the world’s leading instrumentalists. As an accompanist she also works with the London Symphony Orchestra choirs and the BBC Concert, BBC Symphony, London Philharmonic, Philharmonia and Royal Philharmonic orchestras.

Roderick Elms broadcasts regularly for the BBC and performs with all the London orchestras. For many years he was the London pianist for the legendary cellist Mstislav Rostropovich as well as organist to the London Symphony Orchestra. His many recordings include Warsaw Concerto, a Classic FM favourite. He is a busy composer and his music is widely performed.