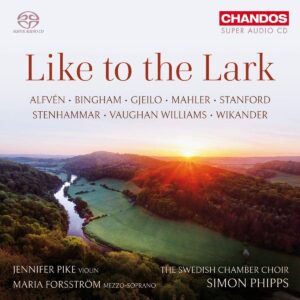 The main interest in this release will be The Lark Ascending by Vaughan Williams (1872-1958), which goes beyond the borders of classical music and in the UK has consistently been voted the most popular piece of all orchestral music.  Here it is given a sensitive interpretation by the outstanding internationally recognised British Polish violinist Jennifer Pike in an arrangement from 2018 for violin and chamber choir by Paul Drayton based on the original 1920 version.

Jennifer is also the instrumental soloist on the final track, Serenity by Ola Gjeilo, that along with two other tracks features the Swedish mezzo-soprano Maria Forsström, and is a 2010 setting of the ancient Christmas text O Magnum Mysterium.

The prestigious Swedish Chamber Choir (Svenska Kammarkören), singing unaccompanied under the direction of London-born Simon Phipps, are responsible for the baker’s dozen tracks that complete this attractive album.  They include Three Shakespeare Songs, also by Vaughan Williams, and two folk songs by Hugo Alfvén (1872-1960) of Swedish Rhapsody fame.

I reckon the disc is worth having for Miss Pike’s 22-minute contribution, but I appreciate that for some the rest of the music is not the sort they would normally add to their collection.  But I urge them to sample it online and hope – like me – they might find it a lovely late-night listening antidote to the abnormal times through which we are living.