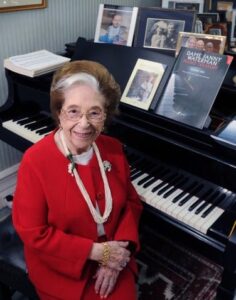 The distinguished piano teacher and founder of The Leeds International Piano Competition – Dame Fanny Waterman DBE – celebrates her 100th birthday today. My acquaintance with Dame Fanny goes back nearly fifty years, so I would like to pay tribute to this remarkable lady.

Back in the autumn of 1972, I enrolled at the Leeds College of Music as a mature student, on their Jazz and Light Music course, the first of its kind in the UK. The course included the history of popular music, the study of arranging and orchestration and the technique of improvisation. Two instruments were required to be studied and in my case these were the piano, at which I already had some proficiency, and the double bass, which I chose because it was suited to all kinds of music.

With time on my hands before the start of classes, I discovered that a piano competition was taking place in the Great Hall of the University of Leeds, just up the road.  For a couple of pounds I could listen to a vast range of classical piano music from ten in the morning to ten at night, with just a few breaks for refreshments. The competitors came from all parts of the world, including the USSR, and were required to play from memory several hours of compositions ranging from the 17th to the 20th century. In the course of three weeks they were whittled down, from around 70 to just five, and these finalists played concertos with the Royal Liverpool Philharmonic Orchestra in the Victorian splendour of the Town Hall.

I quickly became aware of the diminutive but formidable lady who, together with Marion Thorpe, had founded the triennial competition in 1963 and was very much in charge of the proceedings. In fact she lived up the road from the house that I was sharing with some other students in the leafy Leeds suburb of Oakwood.

I was also in awe of the members of the international jury, who almost every day had to listen to nearly nine hours of music. 1972 turned out to be a vintage year as the winner was Murray Perahia (USA), who at the age of 73 is still wowing audiences on the concert platform. Perahia is still in my opinion the greatest artist to come out of the competition.

I have endeavoured to attend every competition since, even if only a couple of days. For many years it was a straight contest between the Americans and the Russians, but it is now dominated by the Chinese and the Koreans. Only two British pianists, Michael Roll and Ian Hobson, have ever walked away with the trophy.

The Leeds is very special in several ways. The competitors are housed together in student halls of residence. They practise on concert grand pianos in private homes. They are taken on outings to local landmarks. Every one of them receives personal feedback from the jury before returning to their native country. The audience plays a crucial role, many taking notes and sharing their opinions with complete strangers sitting near them. It is also quite easy to have a word with the competitors outside the hall afterwards.

Fanny Waterman has always been very possessive about “her” competition and it is no secret that she was deeply hurt at being asked to step down for the 2018 event. She made a point of attending every single session and sitting in the front row!  The current Artistic Director is former Radio 3 producer Adam Gatehouse.

The BBC has played a crucial role in the competition, although it has ceased to broadcast the finals live on TV (they are now shown a week later on BBC4). So in 2018, for the first time, it was streamed live by Medici TV and introduced by Radio 3’s Petroc Trelawny. If you look very carefully you might spot me sitting on the aisle!

Dame Fanny, who still gives piano lessons to a few pupils, was awarded the Freedom of the City of Leeds in 2006 and many celebratory events were planned for this coming weekend, all of which have sadly fallen victim to the Covid-19 pandemic. Among them were a lunch for distinguished guests such as Lady Solti – widow of the conductor Georg Solti – [the former TV newscaster Valerie Pitts, who is a near neighbour of mine].

On behalf of The LLMMG, I would like to extend my warm congratulations to Fanny Waterman and to thank her for her unique contribution to the musical life, not only of this country, but the world in general.