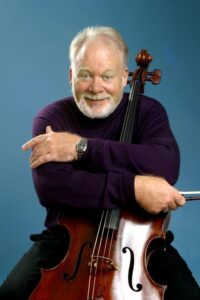 New York-born cellist Lynn Morris Harrell has died aged 76. After study at the Julliard School he became principal cellist of the Cleveland Orchestra, prelude to a solo career which was worldwide but not least in England, performing in 1973-4 at the Royal Festival Hall Britten’s Cello Symphony and Dvorak’s Concerto. Later he became Chairman of Cello Studies at the Royal Academy and briefly (1993-1995) Principal there.