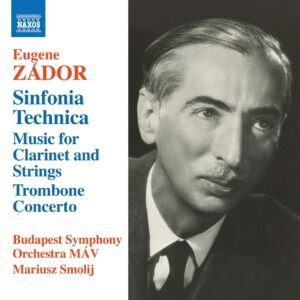 I first encountered the music of Hungarian composer Eugene Zador through his wonderfully uplifting and hummable third symphony, the Dance Symphony [Naxos 8.573274] and have since been delighted to see an emerging series from Naxos of this composer’s music. Zador was born in Bátaszék, a village in Hungary. A sickly child, he contracted pneumonia aged just six and was promised absolutely anything from his devoted mother if he would only recover. He requested a piano and so began a musical career that spanned not only decades, but continents. Zador fled Hungary and the threat of the second world war, settling in Hollywood, where he found work for MGM studios. Although he did write music for some films, he preferred to remain anonymous, as he did not particularly rate his own works in the genre. What he did love was orchestrating the works of other film composers, for whom time was limited; most famously the great film composer – and fellow Hungarian emigre Miklos Rosza, for whom he orchestrated the scores of Ben Hur and King of Kings.

The music on this disc shows the composer at various different stages of his composing career and thus how his music developed. The latest work released here is the Music for Clarinet and Strings, a concerto in all but name. This is probably the lightest work offered here and showcases the composer’s affinity for the music of his homeland and for gypsy influences. Demonstrating adventurous harmonies, the piece is never lacking in memorable melodies and the light scoring makes for a sensitively balanced work, at which the performers excel. Pál Sólyomi’s solo work here is equal parts virtuosic fireworks and perfect blend with the string orchestra, making this one of the highlights of this release.

Musically, I was perhaps less struck by the Trombone Concerto, being in a far more tonally complex musical language, but András Fejér along with the Budapest Symphony Orchestra make a very persuasive case for this slightly more challenging work, which will be a welcome addition to the repertoire of many a soloist on the strangely neglected (at least in concerto form) instrument.

Two shorter pieces punctuate the disc: first, the Tarantella, a scherzo for orchestra. It is a fantastic curtain raiser and shows the sunny side of Zador’s musical personality, as well as his fondness for dance music. Later, we have the In Memoriam. In whose memory is unknown, but the well written liner notes provide a number of possibilities. Whoever its dedicatee in the mind of the composer, this is a truly beautiful and impassioned work. Both of these pieces are for orchestra without solo roles and it really allows the Budapest Symphony under conductor Smolij to shine.

The centrepiece of the release is also for orchestra without soloists and the performers positively outdo themselves here. In a departure from Zador’s usual style, the Sinfonia Technica is the composer’s only major endeavour in the field of “industrial music”, a niche genre including works like Prokofiev’s Le Pas d’acier and famously Mosolov’s The Iron Foundry. Far from the harshness of the Soviet pieces, Zador’s symphony is mellower: a more impressionistic musical canvas, but that leaves me convinced of its connection with film music. The range of colours and timbres insisted upon by the composer are brilliantly captured by the Budapest Symphony and my hat goes off to Maestro Smolij, who succeeds in presenting a cohesive whole in a piece consisting effectively of four tone-pictures. There are harsher moments in this music, but for the most part, it is a hugely expressive lyrical piece to enjoy whilst playing the movie in your mind’s eye.