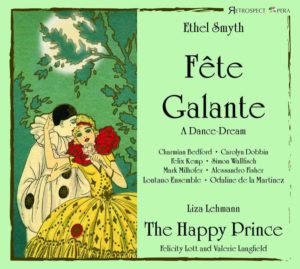 ONE OF LMS’ ALBUM OF THE YEAR PICKS!

Just in time for Christmas, Retrospect opera have released their latest recording of works from composers with direct links to the LMS: Ethel Smyth, whose piano was acquired by none other than Ernest Tomlinson and lived at Lancaster Farm for some time, before time sadly took its toll, and Liza Lehmann, much of whose music is housed in the Library of Light Music.

Smyth’s penultimate opera Fête Glante showcases the great composer at her most inventive, theatrically and musically. Breaking the barriers between the stock characters of the Italian Commedia dell’arte and a verismo-inflected love story, the opera tells the story of a Commedia being performed in the garden of a king and queen, when, behind the scenes, the Pierrot discovers the queen with a masked lover, who also happens to be disguised as a Pierrot, leading to accusations that it is the real Pierrot who has seduced the queen and renounced Columbine. The facade of the comical opening to the piece ultimately collapses entirely and the piece ends in bitter tragedy. The most curious thing dramatically is the blurring of the lines between character roles: are Columbine and Pierrot actually actors playing those roles, or are they Columbine and Pierrot made flesh and, if so, to borrow a phrase, who was that masked man?!

Musically, we have a wonderfully eclectic, yet cohesive score, which begins with a baroque sarabande by way of an overture, before mellowing into a more Edwardian-inflected Musette. Other musical highlights include an entirely a cappella madrigal Soul’s Joy, Now I am Gone and a number of more folk influenced dances, a particularly fevered example of which appears with the Heigh-Ho toward the piece’s devastatingly tragic close. I would argue that Smyth is also using light music idioms to ironically undercut a deeply serious subject matter.

The orchestra (the Lontano Ensemble) is conducted by Odaline de la Martinez, who famously conducted the Proms performance of Smyth’s The Wreckers, also recently re-released by Retrospect. Martinez considers Fête Galante to be Smyth’s finest opera, and the passion shines through in the orchestra’s playing. Given the amount of orchestral writing and varied textures, it is perhaps to be expected that there are times in the recording when the orchestra steals the show with its engaging interpretations of dance numbers. One of the highlights of the singing for me was Mark Milhofer as The Lover, who positively shone in the Retrospect release of Raymond and Agnes giving another outstanding performance in a comparatively small part: his is a sweet and extremely attractive voice, lending itself perfectly to the romantic writing of Smyth’s vocal writing for this role. However, all singers inhabit their respective roles impressively- I say inhabit quite pointedly, as this also lends itself to the blurring of fantasy and reality in the opera. Simon Wallfisch and Carolyn Dobbin bring a great sense of empathy to their roles as the king and queen, avoiding the obvious traps of rendering them too duplicitous, authoritarian and unsympathetic. Meanwhile Charmain Bedford and Felix Kemp imbue their interpretations of their roles with a light and “youthful” vocal touch, creating a sense of doomed innocence for their characters. Alessandro Fisher as Harlequin is able to move swiftly between his character’s clown-like behaviour and dawning realisation of the serious situation around him in the space of a comparatively small role in terms of solo performance.

Added to Smyth’s opera are not one but two extra features, which will delight the listener. The Happy Prince by Liza Lehmann is a dramatic recitation for speaker and piano. In this case, the speaker is none other than Dame Felicity Lott, while Retrospect founder Valerie Langfield beautifully interprets the piano part. It is effectively a storytelling piece for a performer who uses verbal communication and another who uses non-verbal musical communication and the effect is one of true symbiosis- an extremely skilled piece of composition, expertly delivered by two musicians in a pitch-perfect interpretation of spoken word and piano playing. Also included are some archive recordings of excerpts from Smyth’s operas Fête Galante, The Boatswain’s Mate and Entente Cordiale (Smyth’s final opera). All of these are performed by The Light Symphony Orchestra, conducted by Sir Adrian Boult and make a perfect bonus to an already marvellous disc.

As always with Retrospect, the booklet is extremely generous, boasting a full libretto and in-depth articles with a light academic touch from Retrospect stalwarts Dr. Chris Wiley – in collaboration with Valerie Langfield – and Andy H. King alongside writings by maestro Martinez and John Rudlin. Retrospect releases really deserve homes with every keen collector of British operas. They are bound, I am sure, to become invaluable to academic research as well as guaranteed to delight the listener- there hasn’t been a weak link in their catalogue yet and long may it continue this way! DA