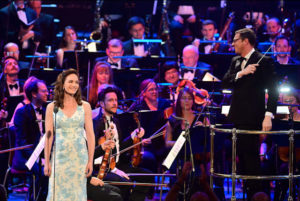 In 2009, a new orchestra burst onto the Proms scene with a scintillating programme of music from MGM film musicals. Having appeared at the Proms every year since then, The John Wilson Orchestra has become one of the must-see concerts of the Proms season. In this, their 10th anniversary season, a capacity audience at the Royal Albert Hall was highly entertained by music from films produced by the Warner Bros. studios during Hollywood’s ‘Golden Age’.

The music of Erich Wolfgang Korngold bookended the programme, and from the opening brass fanfare of the overture from ‘The Sea Hawk’ to the climactic chord of ‘Tomorrow’ from The Constant Nymph, featuring mezzo soloist Kate Lindsey and the Albert Hall organ, the audience was enthralled. In between came a selection of music encompassing adventurous epics, lavish dramas and glamorous musicals, each enthusiastically executed by a truly exceptional group of players. This bright, brilliant orchestral performance, under the exuberant baton of John Wilson, segued effortlessly between sensuous nightclub, swashbuckling high seas and jolly town band, taking on A Streetcar Named Desire (Alex North) with as much skill and aplomb as The Treasure of the Sierre Madre (Max Steiner) and The Music Man (Meredith Willson).

The soloists also excelled throughout, the differing styles of the pieces showcasing their versatility. Mikaela Bennett continued her success as Maria in last year’s West Side Story Prom, melting hearts with ‘It’s Magic’ from Jule Styne’s Romance on the High Seas and raising smiles with ‘I Could’ve Danced All Night’ from My Fair Lady (the first of the two encores). She also teamed up with baritone Matt Ford for the title song from Sigmund Romberg’s ‘The Desert Song’, which perhaps lacked a little of John Hanson’s operatic quality but was nevertheless a beautifully tender performance.

Matt Ford was clearly at home with the love song ‘If Ever I Would Leave You’ from Camelot by Frederick Loewe, and Henry Mancini’s ‘Days of Wine and Roses’, the style suiting his voice perfectly. In contrast, his comedic talents came to the fore in ‘Get Me To The Church On Time’ from My Fair Lady. This number was ably and enthusiastically backed by the Maida Vale Singers, celebrating their 20th anniversary this year. And what a celebration for them! The singers were excellent and clearly had a wonderful time throughout, especially as rowdy pub-goers egging on Alfred P. Doolittle, and as equally rowdy saloon-goers in ‘The Deadwood Stage’. The latter number featured a great comedic performance from Louise Dearman, who also gave emotional renditions of ‘Gotta Have Me Go With You’ and ‘The Man That Got Away’ from A Star Is Born.

Finally, we were brought into the 21st century with the second encore, ‘Harry’s Wondrous World’ from Harry Potter and the Philosopher’s Stone by John Williams, reminding us that Warner Bros. is still making blockbuster films with inspiring scores today.

Overall, there were perhaps one or two too many similar-sounding film scores, but this is a minor niggle, considering they are all so well-written. This is an orchestra that is an absolute joy to see and hear live, thanks to the skill and obvious enjoyment of both players and conductor. It is a well known fact that the musicians, most of whom are principal players in other orchestras, absolutely love to play in this orchestra and in some cases actually arrange summer holidays around the Prom date so that they can take part. This enthusiasm and enjoyment could be seen on the face of every player and was reflected on the 5000+ faces of the audience, which is a far more eloquent review than mere words!