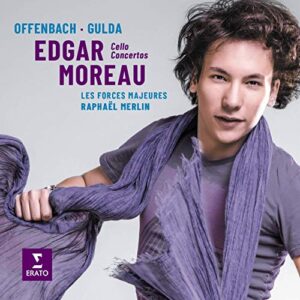 It isn’t often (in fact I rather doubt it has ever happened before) that this reviewer has been able to say completely honestly that “That cello concerto caused me to laugh out loud!”. But that is exactly what happened on this disc with the second featured concerto on this disc that features two boldly unconventional works, each featuring a somewhat anarchic sense of humour.

First up, we have the Concerto Militaire for cello and orchestra by German born French composer Jacques Offenbach. This piece has something of a chequered history. Written for the composer to perform himself, it shows that Offenbach was a virtuoso cellist of extraordinary ability. The composer’s own performance of the piece is documented (though it is unknown if he ever personally performed the epic final movement), but after his death, it fell into obscurity. When rediscovered by the composer’s grandson, an edition was prepared, cutting much of the material deemed too difficult to play, resulting in a performing edition that was seen as ill conceived and incomplete. The performance of that edition would take around 30 minutes and the complete score, which was subsequently reassembled lasts nearly three quarters of an hour to give an idea of just how much material was jettisoned.

Fortunately, the full version has been recorded more than once, but it is a treat to hear this recent recording. Undoubtedly one of the most difficult cello concertos in the canon, it takes a musician of considerable virtuosity. Thankfully we have Edgar Moreau coming to the rescue here, who at the age of 24 has quickly established himself as a prodigious performer, winning prestigious prizes around the world. The piece opens with a somewhat militaristic dotted rhythm, but it is clear from the outset that this will be a relatively light hearted work. A considerable movement lasting 15 minutes, it juxtaposes upbeat jaunty march-like rhythms with episodes tinge with melancholy, but concluding in a decidedly sunny and showy climax. The central movement pushes the aforementioned melancholy to the forefront with a beautifully melodious Andante. The music never reaches any level of profundity here, but neither does it aim to: it seems this is music designed to please rather than inspire. The final movement is colossal. At nearly 20 minutes in length, the energy is clear from the start, the cellist required to play rapid fire cross string chords with extensive double stopping. A brief respite is offered about a third of the way through, before the lightning speed main idea of the final movement returns, making extreme demands on the instrumentalist playing large passages of the material in the uppermost registers of the cello. It is a highly impressive work that really does come with a “wow” factor.

Most will know the name of Friedrich Gulda thanks to his authoritative interpretations of Mozart and Beethoven piano sonatas and concertos, which are still held in high esteem. A fine classical pianist, what is less well known about Gulda is that he also produced a large amount of jazz, blues and rock influenced light music works as a composer. It includes numerous works for jazz band and orchestra, a host of solo piano pieces (including a brilliant set of etudes called Piano Play) and 2 piano concertos in jazz style. The Concerto for Cello, Wind Wind Ensemble and Band is a piece I’ve seen in videos of live performances, but this is the first commercial CD recording I’ve found of the work and about time too. Little will prepare the listener for just how eccentric and eclectic this piece is. The cello opens with a lively theme, immediately repeated by the whole ensemble followed by, of all things, the entry of a rock band in which drum kit and electric guitar are prominent. This theme is alternated with a neoclassical one in which the wind ensemble are more prominent. The second movement, in a simple A-B-A structure is all the more curious. The brass section is particularly prominent here, opening with a tune that seems influenced by American folk hymns. The harmony is extremely simple- bland in fact- which seems used to comment ironically on the previous movement. The B section, a complete non-sequitur re-asserts the Mozartian pastiche style of the neoclassical passage in the previous movement. An extended cadenza follows (a movement in its own right) allowing Moreau to improvise and demonstrate his virtuosity once again (I have, however, seen even wilder improvisations than Moreau’s in a performance viewable online!). The cello and guitar are prominent for the next section (the electric instrument swapped for an acoustic guitar) for a dainty minuet, which nods to classicism, but also to earlier baroque dance music, the guitar sounding at times almost lute-like. The final movement can only be described as insane and hilarious. Marked Alla Marcia, the ensemble begins by imitating a marching band with a heavy “OOM-PAH” in the tuba part. The cello repeats the theme, but in rapid semiquavers and then eventually plays a more melancholy theme by way of contrast. Mid way through the movement, this gives way to the cello and percussion with muted brass seemingly imitating a train running along the tracks hooting its horn. The main theme returns, this time voiced in clarinets and lower brass sounding not dissimilar to a German beer hall band, then transforming into a Mariachi ensemble (I kid you not!). It is brought to it’s ridiculous conclusion in a manner very similar to Offenbach’s overture to Orphée aux Enfers– a winning entry in any programme.

This is undoubtedly worth your time- a recording full of zest and humour and, crucially, performed by musicians who clearly love what they are doing. My only qualm is that the cello seems a little too closely mic’d in the Gulda at times, but it is a minor issue at most. Heartily recommended if you need a good laugh with some quality music!