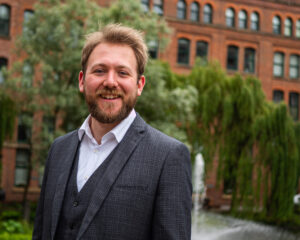 Alex Webb is a conductor from Manchester UK. He studied percussion at Birmingham Conservatoire and graduated in 2012. He went on to achieve a distinction as the Timothy Reynish Conducting Scholar (RNCM) and is continuing his studies as a PhD Student at the RNCM, researching Light Music and the music of Ernest Tomlinson. Additionally, Alex is engaged in an ancillary research project at the RNCM called ConductIT: a pan european Erasmus+ project that aims to build comprehensive online conducting tools for teachers and students alike.

In 2018, Alex won the Unibrass 2018 Best Student Conductor and was a runner up in the National Association of Brass Band Conductors’ 2017 competition.

Alex is the Director of Music for the Greater Manchester Police Band and Conductor for Poulton-Le-Fylde Brass Band. He made his debut with the BBC Philharmonic Orchestra in June 2018, and in February this year he launched the Manchester Light Orchestra- which seeks to promote the very best in Light Music from around the globe. Additionally, he has appeared as conductor with British Police Symphony Orchestra, Liverpool Mozart Orchestra, National Youth Wind Orchestra, Settle Orchestra, Swindon Symphony Orchestra, and Swindon Chamber Orchestra.

Alex has performed as a percussionist with the English Symphony Orchestra, Desford Colliery Band, Brighouse and Rastrick Band, The Black Dyke Band, and The Fairey Band. He has also made recordings for BBC Television and Radio as well as touring to the USA, Asia, and Europe.

Back to “Who We Are”