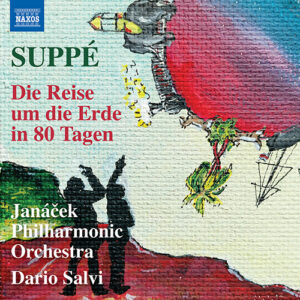 The forces of the Janacek Philharmonic orchestra and conductor Dario Salvi shot to second place in Naxos’ bestseller list this month (Both numbers 1 & 3 were DVDs) and it is easy to see why. Suppé composed the incidental music for a play based on Jules Verne’s Around the World in 80 Days for a performance in 1875 and it has since languished in obscurity until Salvi personally reconstructed the score for the present recording. It is testament both to the passion of the conductor for the source material and the willingness of the Czech orchestra to explore under-represented repertoire. The incidental music is presented here without narration or dialogue to allow maximal focus on the music, something which could arguably work both for and against this CD release depending on your perspective. In its favour, it shows the music arguably in the best possible light, revealing the strength both of the composition and of the performance. However, the filmic music does not exactly fill in the narrative gaps for us as far as the play is concerned and so listeners will absolutely want to read the useful synopsis provided alongside the CD or on the Naxos website, which provides both a story commentary and a small amount of musical analysis. If ever there was an argument for the preservation of the CD medium to help further your understanding of a piece, this edition perfectly demonstrates that. Musically, this is packed with hummable tunes, but it is important to remember that, being incidental music, the music is just that: incidental and fragmentary. It strikes me that a suite could reasonably be produced based on some of the themes used through the play, but what we have here is the music as it could be used in situ, which lends the album the atmosphere of a film soundtrack. There are musical non-sequiturs, as you might expect, but don’t let this put you off, as the performances and sheer fun on display are more than enough to move past these small elements. It showcases the music with all its grandeur, and yes all of its problems, with hints of exoticist fashion never far from the surface, in keeping with the trends of the time. Thus, it provides plenty of insight into the work in an historical context, whilst making the case that it may still prove successful under certain circumstances. The performance is committed and hugely engaging from the orchestra, revealing the fun and satirical edge in the source material as well as the refinement of the composition. It is quintessential Suppé in Vienna, just in a different context than we are perhaps used to. All in all this is a fascinating package. However, I would advocate in this case getting the physical CD as you do need the text of the liner notes alongside the music. This is, as seems to be Salvi’s speciality, an historical document of significance and as such should (as appears to be already happening) be celebrated.