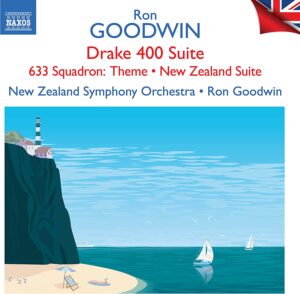 Best known for his film music, Ron Goodwin composed the soundtracks to over 70 films, including Margaret Rutherford’s Miss Marple films, Where Eagles Dare, The Battle of Britain, Frenzy (for Alfred Hitchcock) and 633 Squadron among many others. It is the latter that opens this CD and a more stirring curtain-raiser would be hard to come by. Ron Goodwin himself is the conductor on this re- release, originally on the Marco Polo label, with the New Zealand Symphony Orchestra taking the reins for the performance. However filmic the opening number on the disc, however, many of the other pieces featured here fit more comfortably into that difficult-to-define term of Light Orchestral Music. The piece that lends the disc its name is the Drake 400 Suite, which was a commission in 1979 from the City Fathers of Plymouth to commemorate the 400th anniversary of the eponymous explorer’s return to Plymouth from his famed voyage. Premiered by the Bournemouth Symphony at its premiere, it is actually very easy to conceive of a film running alongside the music, such is the heroic sweep of the orchestral suite. It actually includes a series of variations upon familiar dances and folk idioms including a delightfully tonally unstable hornpipe (The Barbican)!

The other suite on show here is the aptly included New Zealand Suite, which the orchestra play with entirely appropriate gusto. Goodwin visited New Zealand a great deal and so must have jumped at the opportunity to write a suite for the national symphony orchestra. One does not detect many of the classical strains of New Zealand’s music in this work, but it is fair to say that it was only rather later that the likes of Douglas Lilburn really started to achieve note beyond New Zealand. There are occasions in this piece that it does become by turns perhaps a little schmaltzy or perhaps a little bombastic (such as the opening movement), but where it really shines is its musical allegiance with the indigenous Maori population. The first movement is subtitled Aeotearoa, the Maori word for the country meaning “Land of the Long White Cloud”, which brilliantly offsets the small level of bombast in its central theme with a gentler reflection upon the country’s oft troubled history. Similarly, the final movement Po Atarau is an orchestral arrangement of a traditional Maori song, shot through with Goodwin’s ever-stirring style. One imagines it was a real treat for the orchestra to perform, but an even greater honour for Goodwin to have been so welcomed. The performance seems to reflect the level of good will at work here.

A selection of miniatures and film themes completes the listing on the disc. Of the miniatures, it is The Venus Waltz that particularly took my fancy, with its gentle lilting and even slightly Mantovani-inflected string writing at one point. The theme from the film The Trap (which starred two greats: Oliver Reed and Rita Tushingham) gives a sense of a stunningly scenic opening credit sequence (not dissimilar in tone or indeed musical ideas from Frenzy), while the theme from Lancelot and Guinevere rounds off the disc with both the grandeur and romance that such a story demands. A CD that runs the gamut of emotions and is unabashedly large- scale, this should appear to film fans as much as Light Music enthusiasts! DA