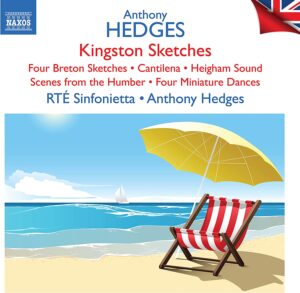 When Anthony Hedges died in 2019, he left a legacy of remarkable music, some of which has been explored and rightly championed in recordings, but much of which still goes infuriatingly under-performed. The composer himself somehow does not seem to have entered the ranks of the household name Light Music composers alongside Coates and Farnon, despite being so clearly deserving of such stature. A recent article for the Light Music Society’s magazine Light & Lyrical penned by the composer’s daughter was enough to send me scurrying straight to a variety of online outlets, where I quickly and eagerly downloaded and listened to all of the material I could possibly get my hands on. Hedges composed in nearly all genres of music, Light Music only accounting for a small portion of his compositional output, which also includes two symphonies, a sinfonia concertante and an array of works for chorus and orchestra. As it is Light Music on show here, however, I shall focus on this aspect.

Compositionally, Hedges strikes me (if it doesn’t sounds too strange a comment) as a “modernist Light Music composer”. That is to say he is a fundamentally tonal composer, but one who is uncompromising in his exploration of extended tonality (not shying away from artful dissonance), rhythmic complexity and a highly individual palette of orchestral colours in often very beautiful, but never sentimental music. Demonstrating all of this to a tee is the CD’s opening work: the Four Breton Sketches, written after a holiday in Brittany. The “programme” is determined more by events and memories of Hedges’ family’s time there, rather than music to describe a landscape. The charming waltz (St. Lunaire) that opens the work is instantly arresting by its use of a carousel-like dance, but with hints of blues along the way, while the Nocturne is a much subtler affair, boasting a beautiful solo oboe line against strings, while the gentle melody still constantly subverts the listener’s expectations. More clearly programmatic is the third movement, Promenade: à Dinard, which might have listeners recalling the orchestral effects evoking car horns honking in Gershwin’s An American in Paris – certain to raise a smile with its musical wit, taking ever more circuitous musical routes to the same perfect cadence at the end of each section. The final movement Jour de Fête is nothing short of thrilling, opening with a spectacularly disjunct main theme (mostly revolving around a major 7th) that leaves the listener immediately wondering how the composer is going to treat the thematic material. What follows is both tonally and rhythmically exciting, showcasing the orchestra’s palette of colours to its fullest, with inventive writing for tuned percussion and some extraordinary chromatic and contrapuntal variations on the original theme, constantly leaving you guessing how we’re going to get back to the original key. It is one of the most accomplished light orchestral suites, outside those of Ernest Tomlinson, that I can remember hearing in a very long time and really deserves more outings.

Only one stand-alone miniature graces the disc, which is the haunting Cantelina, but this is actually an orchestration of a slow movement from the work Pieces of Eight, originally written for four pianos with eight pianists. It proves a perfect counterbalance to the more hefty but wonderfully rousing Heigham Sound Overture, which follows it.

The Four Miniature Dances provide something of a more personal side to the album, with each of the short movements named after one of the composer’s children. The liner notes inform us that this was the composer’s first foray into the realms of Light Music, though it bears the hallmarks of an already mature voice and many of the features that seem to inform the later works on the disc. Of the other two suites in the collection, I personally gravitate to the Scenes from the Humber more than Kingston Sketches but I suspect this is purely a matter of taste, and the Ferensway March that closes the CD still contains a most memorable melody to leave the listener humming happily for many hours!

Hedges himself conducted the RTE Orchestra and, on the evidence of this CD, it
sounds like they enjoyed themselves. The sound is crisp and the orchestra execute their work admirably, no doubt in part due to the composer himself as conductor. There is no shortage of dissonance on show and Scenes from the Humber boasts some remarkably unpredictable writing in its third movement, not unlike the humour found in à Dinard earlier in the disc. It is a real shame there isn’t more of Hedges’ considerable output on CD, but we are left in hope that this release will prompt a well deserved re-kindling of interest in his works. DA

* Sadly, the Library of Light Orchestral Music does not currently house any of Anthony Hedges’ Music. However, should you wish to obtain any, it can be found from Westfield Music (www.hedgeswestfieldmusic.co.uk)