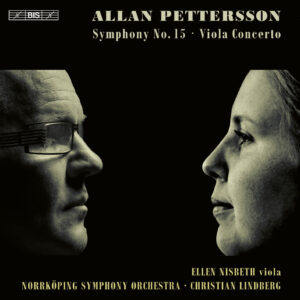 Gustav Allan Pettersson is easily one of the finest symphonists of the late 20th century. As conductor and longtime champion of the composer’s works, Christian Lindberg once stated that Pettersson’s name belongs alongside Shostakovich, Sibelius and Mahler in the annals of great 20th Century symphonic composers. Pettersson’s music is tonal, but often extremely dissonant and seemingly impossible to separate from the circumstances of their composition. Born into extreme poverty, with an abusive father and physically disabled for most of his adult life, Pettersson composed what he thought would be his final symphony from a hospital bed, unsure if he would ever complete it. Ultimately, he would complete the work – a single movement running to an epic 70 minutes – that would prove to be the composer’s 9th symphony and he triumphed by ending his life with a total of 17 symphonies, leaving two unfinished: the first and the last.

Pettersson’s late symphonies have occasionally been dismissed as difficult and noisy, but Lindberg’s recordings of the composer’s entire symphonic output brilliantly disprove this. The 15th symphony is (as most of the Pettersson’s symphonies are) a single movement work, with clearly delineated sections nevertheless. It opens in spectacularly fraught style, with brass entering emphatically in A Minor, before the strings enter with an entirely unrelated musical figure, which almost immediately builds to a cataclysmic wall of polytonal sound, leaving the listener almost wondering where the work can go from here. For the most part, the variety comes about through textural and timbral means, while the tempi and contrapuntal writing remain completely restless. An early passage for woodwind alone was once described as completely unplayable; a criticism that dogged Pettersson through much of his career, along with comments that his music is far too difficult, too large, or simply too dark to programme. However, the conclusion of the 15th symphony relaxes and we hear the composer at his most romantic – practically Mahlerian. Set mostly in glorious C Major, with nonetheless unexpected modulations and polytonal harmonies, the central motif of this section seems to strive for ever higher cries of ecstasy, as if desperate to dispel the storm clouds of the earlier work. Ultimately the work resolves with a stunning C Major with a dominant 7th, as if the light at the end of the tunnel has finally been reached… But it doesn’t end there: in a stunning final exaltation, the strings briefly sustain the C chord, before moving into C sharp major, most of the strings screaming in their uppermost registers and no tonic at the base of the chord. Perhaps the brightness at the end of the work has become a little too intense for comfort, or perhaps this musical leave-taking is simply a statement of the stage being set for something new. It is my personal favourite of the composer’s late symphonies and receives a truly exceptional performance in this release.

Leif Segerstam previously recorded this symphony along with a number of Pettersson’s earlier works with the same orchestra and it is particularly interesting to note that Lindberg takes the work for the most part at a rather gentler pace than the Finnish conductor. Lindberg has often prided himself on attention to detail in the composer’s original score, so I do wonder if this is a case of the conductor following the instructions to the letter, or simply allowing the music to breathe more freely in the particularly fiendish passages. Either way, the effect is a performance of extraordinary clarity and sensitivity: never over-sentimentalised, but every bit as profoundly moving as the piece should be.

Two unknown works (to me at least) take the rest of the CD’s running time: the Fantasie for Solo Viola and the composer’s viola concerto. As a string player in his youth, Pettersson was well acquainted with both the viola and violin, so it seems natural that he would pen concerti for both of them. The Fantasie is a brief, but very impressive work, combining both the composer’s lyricism and chromatic astringency for a solo instrument. Ellen Nesbeth is the soloist on the recording and it is good to have a piece included that allows her to demonstrate her sensitivity and bravura skill at one and the same time in a non-orchestral work. In the concerto, Pettersson deploys the soloist very differently: the viola solo is very much a part of the ensemble as a whole, despite its prominent line. The orchestral textures are similarly complex, while it is the viola soloist that seems to be the lone voice in the wilderness striving toward lyricism and beauty and fighting not to be swallowed by the tumult that surrounds it. The concerto was never submitted for performance or publication in the composer’s lifetime and was seemingly incomplete at the time of his death. It was, however, very performable and quickly found a place in Pettersson’s output as an important work. Nesbeth’s performance of this work marks her out as an unmistakably top-drawer soloist, bringing out the deep loneliness in the solo role, whilst sensitively navigating the musically spiky path that is the viola line with sensitivity without ever being overwrought or wallowing in too romantic a fashion in the lyrical moments. The concerto does not seem, as one of the violin concertos does, to quote from Pettersson’s own early song cycle Barfotasånger. That said, there are still moments that call to mind Swedish hymns or even folk songs in this complex and textured work.

With this release, Lindberg, Nesbeth and the Norköpping Symphony Orchestra have completed their survey of Pettersson’s complete symphonies and concertos, including bringing his unfinished and lesser-known works to light. For those reading on this site and wondering, Light Music it ain’t! It is, however, one of the most important recording projects of modern orchestral music and deserves to be heard far and wide. Bravi a tutti! DA