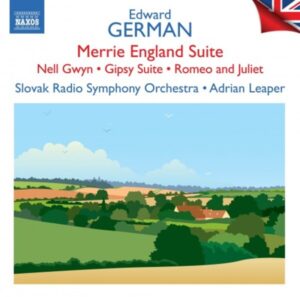 With this re-release, the tenth in an ongoing series, Naxos turns to the composer that Sir Arthur Sullivan saw as the heir to his musical mantle: Edward German (1862-1936). As Dr. David Russell Hulme pointed out in his insightful article for Light & Lyrical, this often led and continues to lead to unfavourable comparisons, rather than an appreciation of German’s music on its own terms. The present release perhaps offers an opportunity to do just that, with its focus not just on the operettas he produced for the D’Oyly Carte company, but in showcasing the composer’s incidental music and suites.

As with many of the previous releases, we are in the company of the Slovak Radio Symphony Orchestra under the baton of Adrian Leaper. Having had one or two reservations about previous Leaper-led releases, it gives me great pleasure to say that I have no such reservations on this occasion. Leaper leads masterful interpretations of the joyous music on this CD with flair and style from the Slovak orchestra. The energetic dance-based works in particular show a kind of controlled exuberance, perfectly suited to the period in which the music was written.

The curtain-raiser here (quite literally) is the overture to Nell Gwyn for a 1900 production of the play starring Marie Tempest. As the liner notes explain, it was actually the leading actress who personally requested Edward German to compose the music for the production. Skilfully weaving folk and hymn tunes into the work, including Early One Morning, it is a terrific orchestral work that would work in many a Light Music programme. This is followed by the famed Three Dances, the second concert work produced by German from his incidental music for the production.

We are well served by some lesser known works in this collection as well as well known works. The Gypsy Suite was actually written as part of a package of proposals for a Savoy Opera. It was never developed and it seems that D’Oyly Carte was either unconvinced or unimpressed. As it stands, however, it is a very satisfying and exciting concert work, which seems to occupy a very useful place between classical and “light operatic” works, making it a particularly adaptable work. I’m less sure how easily the two Shakespearian works would adapt for the concert platform, but it is good to hear them preserved for posterity here at any rate. Meanwhile, none other than the great Ernest Tomlinson MBE appears as the arranger of the marvellous waltz song from Tom Jones (For Tonight), which remains one of the composer’s most popular works.

With the Merrie England Suite, we hear some of Edward German the light opera composer, though his love of traditional English melodies continues to shine through. It is a shame a more recent recording of the whole opera doesn’t exist, but it is nevertheless remarkable how well the Slovak Radio Symphony Orchestra adapt to this most British of musical styles: there is no heavy-handedness in their handling of the material. That said, a whole compilation of music that generally occupies the same style does sometimes seem like an album for dipping into rather than an immersive listen. It is really a superb sampler of an oft-maligned composer and the ideal way to introduce yourself to German’s works if you are unfamiliar. DA