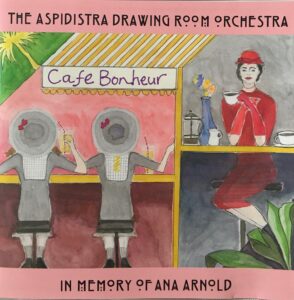 Throwing a party and need some classy music to accompany the soirée? Then the Aspidistra Drawing Room Orchestra have you covered.

The deeply tragic circumstances of this CD’s production in some ways underlie its content. On the way to a recording session, the flautist of the Aspidistra Drawing Room Orchestra died in a traffic accident. Ana had been heavily involved in the programming of the present release, and the album is dedicated to her memory.

For those who don’t know, the style of the Aspidistra Orchestra is that of the salon ensemble, playing reductions of larger orchestral pieces, mostly arranged by the orchestra’s cor anglais and oboe player Adam Bakker, the late Ana Arnold and violinist Liz Menezes, while another name Light Music enthusiasts will be happy to see is Martin Cleave (pianist, arranger and conductor extraordinaire), who arranged the album’s title piece. Opening with the Spanish-influenced Banderilleros, the stage is quickly set for music to transport the listener to a variety of musical landscapes, many of yesteryear. Those listening through headphones may wish to take some warning with regard to this opener, as the levels are slightly higher than some of the other tracks and your volume will require adjustment, as I discovered! Levels aside, however, this is a most entertaining start to the proceedings, perfectly conjuring up images of palm court orchestras in sophisticated cafes, inviting listeners to get up and dance.

There is a large and rewarding mix of music here, from well known Light Music luminaries and composers now less remembered. Ernest Tomlinson makes a welcome appearance, albeit in disguise, with the number Mississippi Melody, written under the pseudonym Alan Perry. It appears in arrangement by Adam Bakker and the salon orchestra reduction actually suits this piece right down to the ground, featuring a lovely solo line for the arranger himself! A number of tracks feature the vocal duo of Liz Menezes and Camilla Cutts. One particular highlight here is Sigmund Romberg’s When I Grow too Old to Dream which, in context of the circumstances of the recording, gains far more poignancy than was probably intended when the recording was first planned. It is sung with a remarkable level of sincerity by Menezes and Cutts, the duo’s voices combining to stunning effect in an unexpectedly moving part of the CD. The duo are also found on the track Love Light, a most welcome addition due to its inclusion of the composer Harry Wood, subject of a terrific book by Maurice Powell but whose music is sadly performed less frequently than that of his brother, Haydn Wood.

Orchestral highlights include a hugely entertaining arrangement of Clive Richardson’s Beachcomber and the classic dance number The Continental, by Con Conrad and arranged by Ana Arnold.

In all, it is a superb sounding release that I will doubtless be returning to eagerly. The playing is first rate as well as a real showcase of some outstanding arrangers, while the album itself is a monument to the power of Light Music to provide uplifting soul-nourishment even in the hardest of times. DA