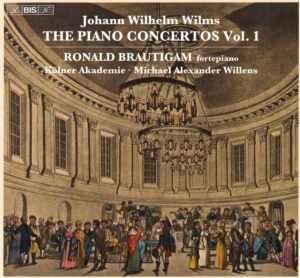 The oft-neglected landscape of Dutch classical music is well represented on recordings, though very seldom in concerts and I have expressed more than once in CD reviews that I believe Dutch music through the ages is a treasure trove from a cultural melting pot that remains strangely untapped today, even in the Netherlands. Such is the sad fate of the man once described as “The Dutch Beethoven” Johann Wilhelm Wilms. The German-born composer moved to Amsterdam, where he soon became one of the most in-demand musicians of his age. He was applauded as a virtuoso concert pianist, who gave Dutch premieres of a number of works by Mozart and Beethoven (the former of whom he idolised) and composed a huge catalogue of works himself, which also shot him to fame (though not fortune). One of his compositions, in fact, became the Dutch National Anthem (Wien Neêrlndsch Bloed) from 1815 to 1932. Wilms’ compositions and performances tended to be the entertainment of choice for the obscenely wealthy aristocracy at the time, though not particularly appreciated by the public at large, a fact which the composer seems to have resented somewhat, as he is quoted in the liner notes: “The majority of the public seems to care little and to have no idea of what goes into making a good piece of music […] If the likes of Haydn and Mozart had lived here, they would probably not have become what they were”. So despite Amsterdam’s cultural prowess, even in the 1800s, it seems that local talent went largely unrewarded and ignored. In the vicinity of the Concertgebouw, several Dutch composers are celebrated in street names, but Wilms is sadly not one of them.

The three piano concertos presented here are very much within the tradition of Haydn and Mozart. Wilms does slightly extend the orchestra found in some of his forebears’ works, but he never attempts to rock the boat in more radical ways as Beethoven did. These are works in which the modulations and formal elements of the music are fairly predictable: chord 1 as a tonal centre is followed by chord 4 or 5 and there are clearly indicated modulations between major and minor keys. The three concertos have the same movement structure as well: an Allegro followed by a Poco Adagio and then a Rondo. The conventionality in these respects, however, is undercut by the composer’s clear gift for melody. The themes are always memorable and the music is consistently well wrought, full of elegance and often a little cheeky humour to boot. An unsigned article from the time of his second concerto points out that “Mr. Wilms, also a very accomplished pianist, seems to set out more to move the listener than to amaze him, an aim in which he often succeeds very well”. As it turned out, the article was actually written by Wilms himself, having stepped into the role of Amsterdam music correspondent at the last minute and found himself in the awkward position of having to review his own concert, hence the very modest tone of his comments! This is, however, music of consistently high quality and demonstrates a refinement of style that easily marks him out as one of the finer composers of the time: if not absolute top-tier, then a very respectable second.

The soloist on this CD is renowned Dutch pianist Ronald Brautigam, who has achieved international acclaim for his recordings of Beethoven’s works on a fortepiano: the ideal candidate, indeed, for premiere recordings of such fine Dutch music. It is the lightness of touch that Brautigam particularly brings to these works, which while not virtuosic, still present no small challenges to the pianist. They were, in fact, written to be performable either on a piano or a harpsichord and Brautigam’s aforementioned lightness and sensitivity allows the music to dance along, often revealing the instrumental flexibility intended by the composer. The orchestra likewise plays with a sensitivity and lightness (in the best sense of the word), in works that could easily tip a little too far toward heavy-handedness, giving most convincing assertions of Wilms’ music deserving a far better foothold in the pantheon of composers of the period.

The release is complimented by excellent liner notes by Horst A. Scholz, while releasers BIS have taken to manufacturing all of their CD packaging from recyclable material for releases that are not only environmentally friendly but also an aesthetically pleasing object to have in one’s CD collection. For those like me, who value the liner notes as well, the physical CD is well worth acquiring.