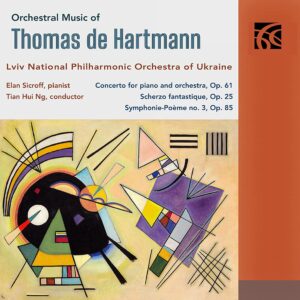 Thomas De Hartmann is foremost famed for his collaborations with the eccentric religious leader (some say cult leader) George Gurdjeff, who was himself an amateur composer. Having travelled (along with his wife) with the leader for some years, De Hartmann notated and instrumented many of Gurdjeff’s melodies and it is unclear to what extent De Hartmann was arranging or effectively recomposing a monody he heard strummed on a guitar. Many of these pieces are quite lovely but ultimately insubstantial, even if they they do pleasingly combine various musical influences: both men strongly believed in a musical polyglotism and wanted to combine western musical influences from all over Europe with Middle Eastern and Asian influences. De Hartmann’s own compositions, however, knock the spots off anything produced in collaboration with Gurdjeff. The musical language is entirely his own and near impossible to classify in his more mature works. The composer was born to a well-off family of German descent in a Russian Province now part of Ukraine and it is non-Russian influences that dominate much of his later work. The earliest work on display is a large scale piano concerto, which does show elements of Russian high romanticism (with tinges of Rachmaninov not far from the surface), but it would be a superficial comparison in what is actually a very complex sound world. Alongside the Russian influence is a clear interest in French impressionist music, jazz, Eastern music and clear nods to film music (writing in Interlude, Maureen Buja notes direct quotes from Gershwin and Joplin as well). It is cast in four movements, which are played without a break and presents considerable demands to both the soloist and the orchestra. Pianist Elan Sicroff has been an advocate for De Hartmann’s music for a number of years now, and has performed as pianist on recordings of his chamber music, songs and solo piano music already (as well as recording several of the Gurdjeff-instigated works). This concerto is no mean feat, but Sicroff seems to succeed in making even the most difficult passages sound effortless, without overdoing the more overtly romantic passages. It is also largely thanks to the tireless efforts of the pianist that the recordings exist at all, so we do owe a debt of gratitude to him for all his work.

The major later work on the disc is one of a cycle of Symfonie-Poèmes, (in some ways a symphony in all but name) this time, the third (the brief fourth is available on another CD). Here, one is presented with another problem with De Hartmann’s mature music, namely how to write about it at all. Comparisons with other works seem somewhat hollow, because the fact is there is simply nothing like this music. Some aspects sound vaguely Eastern-European, but the tonal and timbral language is very different from most that we are familiar with from the region. The first movement opens with a hymn-like tune, creating a sense of serene stillness boasting beautiful writing for strings in particular. The stillness is undercut, however, by the subsequent music, which adds a very ominous sense to the proceedings, as if something much darker is struggling toward the surface. It may call to mind the darker reaches of Holst’s music, but there is something influenced from non-European music here as well, tinged with bitonality. The second movement, a dark scherzo, is perhaps more Prokofiev or Stravinsky inflected, while the third begins as an exuberant folk dance which becomes gradually more menacing at its climax, though the conclusion is far mellower, calling to mind the serenity of the work’s opening.

It is of course poignant to have a CD of music of such high quality music from a composer who seems to have identified more as Ukrainian than Russian performed so magnificently by a Ukrainian national orchestra in light of current events. Our own historical context notwithstanding, however, this is still a recording of some significance, bringing to light these important and never before recorded works of a major composer, who too long has remained in the shadow of a more famous figure. The performance is of an exceptionally high standard, making a most committed argument in favour of the composer. The contrasting textures and powerful rhythms are particularly impressive in the Sinfonie-poème, demonstrating the music’s range from spiritual stillness to hair-raising vehemence. De Hartmann is, I suspect, a very major composer whose time for rediscovery has finally come. DA