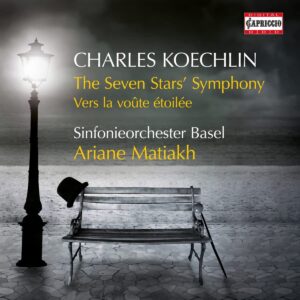 In the copious writings about French music in the 19th and 20th centuries, there are certain composers who seem unfairly relegated to mere footnotes. One such example is Charles Koechlin, whose catalogue of 226 works has only given rise to a handful of recordings, some of which are a little dated and would be well served by modern recording techniques. A polymath, Koechlin’s interests ranged from his fascination with stereoscopy and prolific writing, both in musical and political fields to a lifetime of world travel, driven by his desire for knowledge about other cultures. How he managed to produce so much music in this time is a wonder! The monumental Seven Stars Symphony, which runs to over 40 minutes, pays tribute to one of the composer’s other passions: the cinema. The form is highly idiomatic: 7 movements, each with the name of a movie star attributed.

The first: Douglas Fairbanks (en souvenir du voleur de Bagdad) is the only movement that directly references a specific film with The Thief of Bagdad. This is hardly swashbuckling music, however, more a gentle stroll through the Middle Eastern city in the sweltering heat of the day. The second movement dedicated to Lilian Harvey (as are over 100 short pieces by the enamoured composer for the “flattered but slightly alarmed” [Bob Reilly] actress!) Is highly romantic and dreamy fare. The third movement is a more austere and aloof choral based section dedicated to Greta Garbo, which has invited some comparison to Messiaen, as a result of the inclusion of an Ondes Martenot in the orchestration. This is a superficial comparison only, as the two composers’ writing for the new instrument is worlds apart. While Messiaen allowing the instrument to soar exuberantly over a massive orchestra in Turangalila, Koechlin writes sensitive solo music, perhaps invoking the spectral presence of the film stars who appear on a screen only by electronic means. The symphony reaches a kind of scherzo with the delightful Clara Bow et la joyeuse Californie, which is one of the work’s most raucous passages, albeit highly entertaining. It is often the case in Koechlin’s music that the joyous music often creates an impression of exuberance going a little too far, teetering on the edge of sounding out of control: a light theme often develops into complex polytonal passages, lending a slight sense of danger to the proceedings. In this movement, however, the resolution is clearly a happy one. Two of the remaining movements take the unusual form of a set of variations on the letters of the star’s name, the brief but beautiful Marelene Dietrich (which together with the Emil Jannings movement form a kind of aural interpretation of Der Blaue Engel) movement and the rather more substantial Charlie Chaplin movement, which is full of orchestral slapstick chaos alongside more reflective passages. The symphony concludes with a brief but powerful coda, growing swiftly from solo strings to full orchestra in a rousing climax.

In addition, the disc includes one of Koechlin’s most beautiful tone poems Vers la voûte étoilée, a starry piece of a very different sort! Starting from an enigmatic minor chord in the strings, it quickly develops into some of the loveliest flowing melodies in the composer’s output, featuring beautiful playing from first a flute soloist and then a French horn, before building towards a glorious sunny climax for full orchestra and ending even more enigmatically than it began (don’t go looking for clear musical resolutions here).

The music of Koechlin is very difficult to describe: it is full of impressionistic touches, but the composer’s travel and liberal attitude to musical methods, styles and influences from other cultures makes him near impossible to categorise. Above all, Koechlin wrote for himself and was not an avid self-promoter, which might explain his relative obscurity. He is a master of counterpoint, orchestration, free tonality and colour, providing the listener with a musical through-line from late Debussy to Messiaen, even Boulez. As comfortable writing atonal passages as he is in the most hummable of tunes, he is a composer who does not differentiate between “serious” and “light”, or even “high” and “low” art as his cinema influenced music attests. This is not, however, film music. Rather, it is music influenced by cinematic dreams. Composer Darius Milhaud called him a “magician,” and conductor Heinz Holliger an “alchemist of sound.”

The Basel Symphony Orchestra excel in their performance of this sometimes extraordinarily complex music with incredible sensitivity and flair and it is easy to see why the ensemble has been met with rave reviews for much of their recent output. Under the baton of French conductor Matiakh, they have a clearly insightful guide through the immensely colourful worlds of this composer. One can only hope that this true highlight of the year’s recordings so far will prompt further recordings of the composer’s symphonies. There are two numbered symphonies, both of which have recordings from old radio broadcasts and are in desperate need of good studio recordings, while his other titled symphony Symphonie d’hymnes has only ever seen one movement recorded, so now the time is truly ripe to revive these genuinely neglected masterworks. In the meantime, sit back, relax and enjoy what is truly the definitive recording available of the Seven Stars Symphony! DA