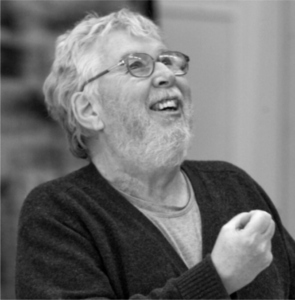 Whilst not a composer of Light Music, the influence of Sir Harrison Birtwistle, who has died aged 87, is undeniable. Born in Accrington in Lancashire, Harry’s parents bought him a clarinet and arranged for him to have lessons with the local bandmaster. He would also go on to find work as a pit musician, accompanying several G&S productions as well as choral performances. Later, he went to the Manchester College of Music, where he studied under Humphrey Procter-Gregg (as did fellow composers Sir Peter Maxwell Davies, Alexander Goehr and even Ernest Tomlinson!). Birtwistle achieved a level of musical notoriety as a result of his uncompromising musical language. At a performance of his first opera Punch and Judy at Aldeburgh, Benjamin Britten walked out. Similar controversy followed with the premiere of his saxophone concerto Panic at the Last Night of the Proms in 1995, which was similarly greeted with a mixture of bewilderment and walk-outs, despite the composer’s assertions that it was meant to be a fun piece. The Royal Opera House premiere of his masterful Arthurian opera Gawain was marred with noisy protests arranged by fellow composers Frederick Stocken and Keith Burstein, who took it upon themselves to deride the then avant-garde in favour of a return to more traditional music. Evidently the tide was not for turning! Birtwistle’s music, whilst taking no prisoners, did eventually find a comfortable home in major concert halls and opera houses, thanks to the composer’s ability with both high drama and hugely atmospheric instrumental writing. His gigantic tone poem The Triumph of Time, completed in 1972marked an early landmark for the composer and quickly earned him an international reputation. Earth Dances, composed in 1986 helped cement this reputation as an orchestral composer, but it was his operatic works that regularly won the most acclaim internationally, including stagings of Gawain in Salzburg (described by the composer as “the worst production of any opera” he had ever seen!). The Mask of Orpheus from 1984 was recently revived by English National Opera and his 2008 work The Minotaur has been revived by the Royal Opera House for whom the work was commissioned. Birtwistle opted to shun the media spotlight, despite the occasional controversies prompted by his works and lived quietly in Wiltshire with his wife, the singer Sheila Duff who died in 2012. He is survived by their three children Adam, Silas and Toby. DA