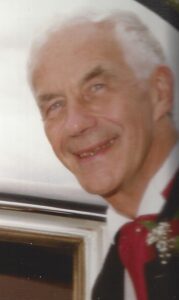 When I was a child, I inevitably fell asleep to the sound of Dad playing the piano. If it wasn’t the piano it was he and his friends rehearing chamber music. And on the nights when he wasn’t playing, I could hear him downstairs humming away – a tune he was composing or preparing.

For many years, The Marlowe Ensemble, a musical group numbering about forty, would meet at our house in Lostwithiel for what we called a Music Week. Some of Grahame’s friends from Kent (where he was a member of Sidcup Operatic Society) would visit with their children and the musicians would perform Music Halls and concerts in St Bartholomew’s Church. Grahame would conduct, play the Double Bass or the piano and was co-coordinator of The Marlowe Ensemble with Malcolm Youngs.

Grahame was a long-standing member of the St Mewan Sinfonia in Cornwall, also playing for the Cornwall Symphony orchestra for many years.

He formed a trio of local musicians who played Palm Court music around Cornwall.

He didn’t just play music, he composed it too. A music professor at Trinity College Oxford happened to find a piece of unfinished Edward German music in his piano stool. He wrote to Grahame and asked him to finish the piece which he promptly did. I was myself living in Oxford at the time and went to Trinity, met Peter the professor and was lucky enough to hear the piece played by the University Orchestra. What a privilege!

Later, as well as singing with the Wadebridge Male Voice Choir, Grahame did a two year stint with the Fowey River Singers. He performed in two or three of their concerts in Fowey Church and sang some beautiful choral music, notably Do Not Be Afraid by Philip Stopford, which will be played at his funeral.

When he visited family, we would ask him to play the piano for us and he always would. At Christmas this was particularly lovely – we would have our own mini concert with Grahame rolling out the melodies – no music needed.

When we went to his house last week, on the piano was a piece of music written in Dad’s beautiful musical hand. The piece was called Jake. Jake was a dog that dad had owned. Poor Dad missed that dog so much he created a musical tribute to him. He also wrote a wonderful piece for his stepdaughter’s dog, Biggles.