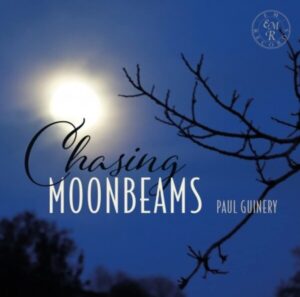 Champions of Light Music repertoire EM records and Paul Guinery present a remarkable new CD of piano rarities with Chasing Moonbeams, which all Light Music enthusiasts should acquire for their collections as quickly as possible. Featuring an array of premiere recordings by Light Music luminaries, including Montague Ewing, Edward German, Madeleine Dring and Ivor Novello, Guinery offers us a generous journey through some of the lesser-known alleyways of tuneful music. It is just such a premiere that opens the disc: Blue Blazes by Joseph Tunbridge; a rare example of a British composer exploring Ragtime rhythms with plenty of humour on display in the brief pianistic flourishes, dextrously navigate by Guinery. Fred Hartley assumed the name Iris Taylor for what he considered his more romantic output, which we hear in spades with Dreamy Afternoon, while the CD’s title derives from the third track on the disc: Chasing Moonbeams, by Sherman Myers (Montague Ewing), displaying some real finger acrobatics from the performer! Other Light Music stars represented here include Billy Mayerl (whose identifiable style dances through Fireside Fuseliers, There’s a Star in the Sky and Stranger in a Cup of Tea), Roger Quilter, Richard Addinsell, Herman Finck and Stanford Robinson. While I must admit that Addinsell’s Rachmaninov-inflected hyper-romanticism does absolutely nothing for me as a listener, one must still applaud Paul Guinery for his command of this challenging music, which proves ET’s quip that “Just because it’s Light Music, doesn’t mean it is easy”! Some complete unknown works (to me at least) provide particular highlights here as well, including Reginald Forsythe’s Serenade for a Wealthy Widow and Douglas Brownsmith’s Larry The Lamb, while a number of pieces by Madeleine Dring (including two premieres) are a welcome addition to any programme of lighter piano repertoire. One could make a pretty convincing argument for this CD as pleasing background music (and indeed it would suit many a dinner party), but I would still recommend the listener gives it their full attention for at least one playing, because this is highly nuanced playing with a lightness of touch that suits the music completely. This CD is something of a follow up to Guinery’s previous release with EM Records Dicky Bird Hop, after which, he comments in the liner notes, he received many comments including phrases like “why don’t we hear this wonderful music any more?!”, which provided adequate impetus for the sequel. On the basis of both releases, I think we can enthusiastically await a third in the series (and fourth and fifth – if it’s not too much work, Paul!), as there is a treasure trove of Light Music for the piano just waiting to be re-discovered and heartiest of thanks to EM Records and Paul Guinery for the revelations included here! DA