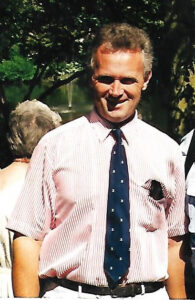 John had an interest in a variety of genres of music and from a teenager, he could heard playing Military Band music from his bedroom. As he got older his interest grew to include light music, classical and many others.

He was a long standing member of many music societies, the LMS being one. He looked forward to receiving the society magazine, especially recently as his health deteriorated (having Parkinson’s Disease for nearly 20 years). He was especially proud to have had his “Desert Island Discs ” printed in the last edition of the LMS magazine, two pieces of his favourite music being used at his funeral, “Brighton Hike” by Archibald Joyce on the way in and “Madrugado” by Ronald Binge for a time of reflection.

He was very knowledgeable about music and composers, and will be greatly missed by his sister.

One of the nicest things about being Membership Secretary of the Light Music Society is the personal interaction with members and I was always pleased to receive one of John’s handwritten notes that accompanied his membership payments. His self-effacing humour always made me smile, and we all loved reading the humorous remarks that came with his Desert Island Discs! (You can re-read these in the Winter 2021 issue of the magazine.)

John’s long-standing support of the Light Music Society has been very much appreciated over the years.