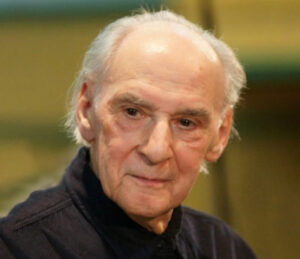 Born in Vienna, Joseph Horovitz was the son of publisher Bela Horovitz and his wife Lotte. He had two sisters, Elle and Hannah. The family was forced to flee Vienna only days after the Nazi annexation of Austria, becoming separated, only to be reunited in Antwerp before travelling to London. Horovitz studied music and modern languages at Oxford and then studied at the RCM under Gordon Jacob and with Nadia Boulanger in Paris. He began to conduct shortly after his studies, first at the Bristol Old Vic where he discovered a love of mixing the classical composition style of his education with lighter music and popular forms of the time. This later found its way into works like his Jazz Harpsichord Concerto of 1965, which uses an amplified harpsichord as well as drums and bass to form an unorthodox jazz ensemble. He was most famous for lighter works including the pop cantata Captain Noah and His Floating Zoo to a text by Michael Flanders. The composer’s sense of humour was also often on display in his music, not least in his works composed in collaboration with famed musical humorist Gerard Hoffnung. One such collaboration gave rise to his Horrortorio, a wildly satirical work poking fun at both Handelian vocal writing and the popular Hammer horror films at the time. He wrote numerous concertos, over seventy film and TV scores including Rumpole of the Bailey, three operas and the popular Jubilee Toy Symphony to commemorate the Queen’s Silver Jubilee in 1977, which included toy instruments alongside a more conventional orchestra. He is survived by his wife Anna, their two daughters, six grandchildren and three great-grandchildren. DA