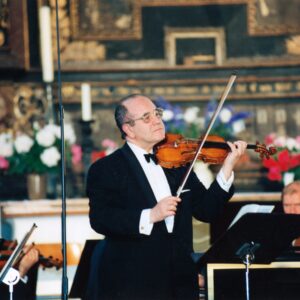 Virtuoso violinist and son of David Oistrakh (also a virtuoso violinist) was born in Odessa (Ukraine) and studied at the Moscow Conservatoire. He was a frequent visitor to Britain from 1953 and other places in the West, performing with his father and/or Yehudi Menhuin in J.S Bach and Mozart. In 2003 he marked the 50th anniversary of his London debut by performing the Beethoven concerto. Latterly he taught at the Brussels Conservatoire. He sometimes played in a duo with his son Valery, keeping up the family tradition. His recordings, with or without his father, were much sought after.