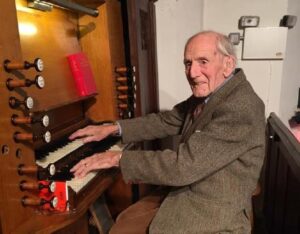 Francis Alan Jackson has died aged 104. Born in Malton, North Yorkshire, he was associated with York Minster’s music for over 90 years. He succeeded Sir Edward Bairstow, Jackson’s teacher and mentor, as organist and Master of the Choristers when Bairstow died in 1946, less than a year after Jackson’s demobilisation from army service. He held the post until 1982. Jackson was also conductor of the York Symphony Orchestra and the York Musical Society. He was a superb organist, giving many recitals in many places. I heard him several times at Doncaster, notably in a superb recital in a Doncaster Arts festival I organised in 1966 which included, as his recitals usually did, his own compositions. These included canticle settings, anthems and hymn tunes (the hymn tune East Acklam became popular) and a variety of secular works including four sonatas for organ. To his musical abilities he brought an urbane personality and he was sought after as organist, conductor and teacher (his pupils included John Barry of James Bond fame). His passing is surely the end of an era.