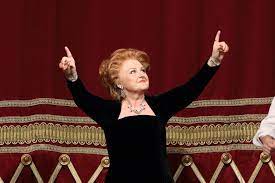 The world famous lyric coloratura soprano Edita Gruberova has died at the age of 74, only just over two years since her official farewell to the stage with a performance of Donizetti’s Roberto Devereux. Other noted roles included the title role in Lucia Di Lammermoor, which she sang frequently between 1975 and 2019 and most famously Zerbinetta in Richard Strauss’ Ariadne aux Naxos, which she performed in over 200 performances. Conductor Karl Böhm, who knew Strauss personally, commented of her debut in the role that he wished the composer were still alive to hear it. She made her debut at the Vienna State singing the Queen of the Night in Mozart’s Magic Flute, which she would then perform all over the world including Glyndebourne and the Metropolitan Opera. She was described by The Washington Times hailed her as “without doubt the finest interpreter of Donizetti’s mad heroine singing today”. She leaves a shining legacy and over 180 recordings to her name. DA