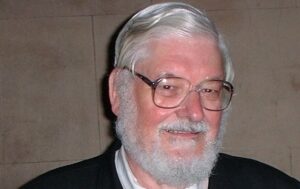 King-Smith, born near Bath, was long associated with the City of Birmingham Symphony Orchestra, being at various times its concert manager, administrator, acting chief executive and archivist. In 1995, the CBSO’s 75th anniversary, he published its history. He was a practicing musician, singing and conducting choirs including the Bath Cantata, the Circle Singers of Leamington and various instrumental ensembles. He composed too, notably on Psalm Symphony (2006).