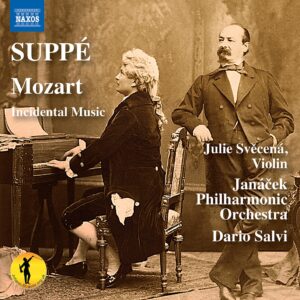 Dario Salvi makes a welcome return to the Naxos catalogue with this most unusual and engaging release. Suppe is sadly best known for a handful of “lollipops”, mostly excerpts from his operettas, but fingers crossed this release will kindle a little more than passing interest in his substantial output. Suppe wrote incidental music for the popular play Mozart in 1854. With nearly an hour of music, the incidental music is far more than scene-change music but actually written to accompany specific passages of dialogue and action (many of which are scripted in the score) — effectively a film score before there was even such a form of entertainment! A very substantial overture opens the suite, which itself would be very well suited to many a Light Music programme. It is a skilful blend of original music by Suppe and exceptional expansions of Mozart’s motifs primarily from the operas Don Giovanni, Die Zauberflöte and Le Nozze di Figaro, showcasing both the light and dark of Mozart’s compositional output. It would be fair to say that Mozart’s biography arguably contains more dark than light, and the music of the suite progresses slowly from youthful exuberance to the rapid decline in the composer’s personal life and health, closing with declamatory quotes from the near ubiquitous Requiem. Deeply impressive is the Act 1 Concertino movement for solo violin and orchestra. It is a passage demanding considerable virtuosity on the part of the soloist and prize winning violinist Julie Svěcená is more than up to the task, tackling the challenges of the work with a lightness of touch — in short: everything you could ask for. This disc marks Salvi’s second collaboration on CD with the Janáček Philharmonic and it is refreshing to hear such unusual repertoire so well performed by the orchestra. The sound balance on the recording is consistently high quality and the lightest moments could have you convinced that you were hearing a Viennese orchestra on New Year’s Day. The darker moments pack a serious emotional punch, echoing the drama on stage. Culminating in the collapse and death of the protagonist, whilst contemplating the spiritual aspects of his music, this is highly dramatic material and you’re guaranteed of quite an emotional journey! It is worth noting that this CD is essentially a precursor to a more complex performance of the play with its music in place that is still to come. Dario Salvi is due to conduct the orchestra and an adapted text of the play (the original being somewhat archaic and difficult to translate literally) is to be used for this performance. Here’s hoping this CD will generate considerable interest in this most intriguing undertaking. Regardless of the play as a literary work, however, it is safe to say that the music community is well served by this release of Suppe’s music on its own, revealing a fascinating insight into the composer’s “other” work and showing not only a fine composer but a skilled arranger, well versed in the art of pastiche to boot!