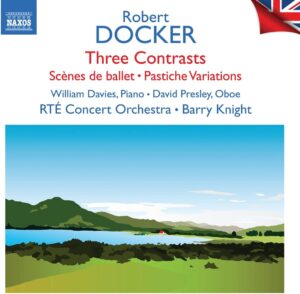 Though perhaps not the best known name in Light Music, Robert Docker is a name we should pay considerably more attention to. Known primarily for his arrangements, this CD showcases Docker’s prowess as a composer, though arrangements of well-known tunes do occasionally crop up in the larger scale works. The CD opens with the virtuosic romantic sweep of Legend, boasting the talents of William Davies on the piano. The notes for the CD rightly describe it as a work that could stand alongside Addinsell’s Warsaw Concerto and the work does have a similarly Rachmaninov-inflected style. It is there that the similarities end, however, as there is a level of sophistication at work in Docker’s orchestration that immediately sets it apart from Addinsell (who often did not orchestrate his own works). More playful in tone, also for piano and orchestra are the delightful Pastiche Variations which close the disc. Unusually, we actually hear the first variation before the statement of the theme revealing the piece to be variations on the famous French tune Frère Jacques. It is testimony to Docker’s ability that he can make the most well-known tunes sound entirely original thanks to his skill as an arranger and orchestrator, shown also in Blue Ribbons and Spirit of Cambria. The Light Music heart and soul of the composer lies in the superlative miniatures such as the gleefully humorous Tabarinage and the hauntingly beautiful Air. The suite Scènes du ballet also demonstrates this miniaturist tendency, suggesting a classical dance setting, though it is apparently unclear if the suite was ever intended to be used to accompany dance. Meanwhile, the Three Contrasts for Oboe and Strings might suggest a concerto-like form, but it is actually three completely unrelated works for the aforementioned forces, which nevertheless work well played together. David Presley, our soloist for this work, plays with flair and verve capturing both the composer’s gift for musical wit and flowing effervescent melody. The orchestra playing is exactly the high quality one has come to expect from musicians of this calibre and the balance is superb. This is, of course, a re-release in an ongoing series of Light Music Classics, formerly on the Marco Polo label (probably with some remastering and undeniably better cover art!), but I must admit that this one had completely passed me by in previous years, so it was a real treat to spend time getting to know the composer’s work and the CD has been happily spinning since! As always, here’s fervently hoping that the continuation of these re-releases will introduce new audiences to the ever-revealing delights of Light Music!