Orchestra of the Light Music Society 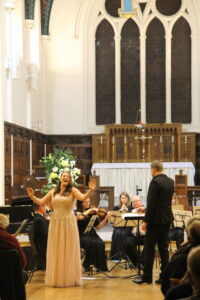 A cold Sunday afternoon in January saw the Orchestra of the Light Music Society serve up a banquet of musical delights to a packed audience at Christ Church, Skipton. This highly entertaining programme of light music follows on from the OLMS’s successful sell-out inaugural concert in August last year. Under the consummate baton of conductor Alex Webb, this talented group of hand-picked musicians from all over the north west held the audience in the palm of its hand from the opening fanfare to the final flourish.

As the vibrant brass chords of Julius Fučik’s Florentiner March rang out to the rafters to begin the programme in style, it was clear that the audience was in for a real treat. The full orchestral sound  belied the relatively small size of the 20-strong ensemble, giving the impression of a much larger number of players, whilst the magically quiet middle section showed a contrast of dynamics that was to be a recurring theme throughout the concert.

Angela Morley’s Reverie for solo violin and strings gave both the orchestra leader and the string section an early chance to shine, with a beautifully rich yet ethereal sound accompanying Matthew Chadbond’s accomplished solo. 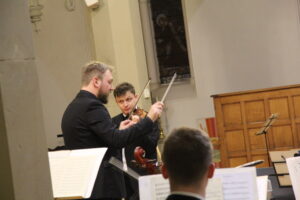 In contrast, The Clock & the Dresden Figures by Albert Ketelbey was a playful, quirky performance, featuring a piano solo and busy percussion clearly depicting the clock figures coming to life and dancing to the beat of the ticking clock.

This was followed by the first of several surprises for the audience. Coronation Scot by Vivian Ellis was played whilst original Pathé news footage of the actual Coronation Scot train in service in the 1930s was projected onto a screen, accompanied by smoke effects and appreciative murmurs from the audience. The combination of the evocative music (plus train whistle!) played in tandem with the locomotive steaming along the tracks and the smoke drifting around the church made for a totally immersive experience!

There followed an exquisite rendition of Ronald Binge’s The Water Mill by oboist Heather Cossins, the simple English pastorale-style tune played to the backdrop of the bubbling lower strings depicting the constantly turning waterwheel of the fictional mill.

Soprano soloist April Grime then took to the stage with a confident and characterful performance of Rusalka’s Song to the Moon by Dvorak. What a delight to hear April’s rich, clear tones resounding around the church, blending seamlessly with the haunting cor anglais solo in the final bars.

No Light Music Society concert would be complete without a contribution from former Society president Ernest Tomlinson and on this occasion, it came in the form of Canzonet from the Silverthorn Suite, a charming and tuneful offering requiring precise, delicate articulation from the orchestra.

Best known as the theme tune to the 1940s radio programme Music While You Work, Calling All Workers by ‘master of the march’ Eric Coates brought the first half to a resounding close.

As the light through the east window faded from twilight to dark, the orchestra swung back into action with the lively Tritsch-Tratsch Polka, its intricate rhythms showcasing the one-man multi-tasking percussion section who was consistently excellent throughout the concert.

Leader Matthew Chadbond’s second solo of the afternoon could not have been more different to his first, Monti’s virtuosic Czardas calling for confident flair and technique that Matthew accomplished with ease, including the notoriously difficult skill of harmonics. This piece also highlighted the orchestra’s ability to handle constantly changing tempi under Alex’s expert direction.

Jerry Bock’s Sunrise, Sunset from Fiddler on the Roof, featuring a beautiful bassoon solo, preceded the second appearance of April Grime, who brought animation, character and fun to her performances of the Laughing Song from Die Fledermaus and Vilja Song from The Merry Widow. There were one or two moments in these two pieces when the orchestra slightly overpowered the voice, but not enough to detract from the engaging performance.

The audience was then treated to a display of ballroom dancing as Callum Edwards and Deanna Gore from the Andrea Wortley School of Dance proceeded to waltz around the church to Robert Farnon’s Westminster Waltz. It was incredibly moving to watch the simple, elegant movements of the dance to the accompaniment of the lush orchestration of the music, with the orchestra again achieving a sound more consistent with much larger numbers. 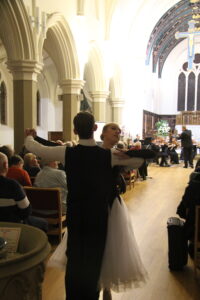 There followed Sandpaper Ballet by Leroy Anderson, a novelty piece featuring syncopated ‘sandpaper’-like sounds from the percussion. Within a few bars, the audience noticed a flat-capped, overall-clad figure, seemingly intent on sweeping the floor as he ‘accidentally’ strayed into the orchestra’s midst and became part of the performance. This was a comic cameo from LMS volunteer David Greenhalgh, who proceeded to perform a routine of sweeping brush one-upmanship with Alex, the two of them cleverly incorporating the ‘sandpaper’rhythms into the brushwork on the floor of the church and leaving the orchestra to play on under their own steam! (The floors at Magna House should be spotless from all David’s brush practice!) 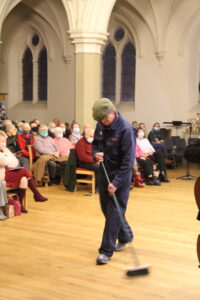 And so to the last piece of the programme, a showstopping selection from The Sound of Music which had the audience smiling, singing and tapping their feet. The ensuing enthusiastic applause was encouragement enough for the orchestra to play an encore, bringing a touch of Vienna to Skipton with Strauss’s Radetzky March, complete with traditional audience participation. This, along with the standing ovation received, was a suitably rousing end to a sparkling concert and two hours of wonderful escapism!