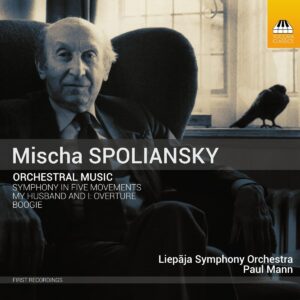 For anyone who, like myself, had a passing familiarity with the music of Mischa Spoliansky, this release may come as something of a surprise. The composer is best known in a number of “lighter” genres, having first risen to prominence as an excellent writer of cabaret songs in the years of the Weimar Republic, including some composed for Marlene Dietrich. His songs Alles Schwindel (It’s All a Swindle) as well as Morphum (Morphine) and Das Lila Lied (The Lilac Song) were instant hits. The latter of these songs in fact references the title of a 1919 film Anders als die Anders (Different from the Others) starring Conrad Veidt, whose character becomes embroiled in scandal when his homosexuality is discovered. The song is dedicated to Magnus Hirschfeld, who appeared in the film (though these scenes are now lost) and who was an outspoken advocate for sexual minorities and early campaigner for equal rights — quite the progressive subject for both film and song for the times, though Spoliansky did write under a pseudonym. The composer was also a popular writer for the stage and especially the screen, writing the scores for many films.

The appearance of a symphony in this vast output might be expected, but what is surprising is the fact that this is its first recorded performance. Originally intended to be subtitled Sinfonia Humana, (later replaced by the more dispassionate Symphony in Five Movements) it is a work on a truly grand scale, running to nearly an hour in length. The musical language, however, is clearly more informed by the composer’s grounding in lighter forms. Really, it sounds like the soundtrack to a non-existent epic film. Each movement is subtitled in a manner somewhat reminiscent of Mahler 3, though the music bears no comparison. The first movement And Thus Man was Created, opens with an arresting full orchestra fanfare — a motif that will be used several times through the work, not just this movement. This gives way to a gentler theme first heard on woodwinds, then in the strings and embellished by the brass before the fanfare is again heard. An impression of an organism of growing complexity is achieved, though it is effectively a Light Music work on a large scale. The post fanfare motif is developed effectively in a series of variations, evoking very different moods in a very well orchestrated musical landscape, with recapitulations of the opening theme serving as punctuation marks between the variations.

The second movement Ode to Love starts in a manner that falsely suggests we are heading into a scherzo, but the music soon relaxes into a memorable flowing and romantic motif. The B theme in this movement is essentially a development based on an inversion of the opening fanfare, swelling to a terrifically satisfying climax. The following movement is the actual scherzo, or Humoresque to give it the correct title — with another memorable theme in the form of a mazurka.

It is suggested in the notes on the CD that the subsequent slow movement is in a way Spoliansky’s response to the Holocaust — the Jewish composer was forced to flee Germany, though was fortunate to some degree in that he did not personally lose any family or close friends in the atrocities wrought by the Nazis. The music does indeed have a somewhat dogged quality, much of the music being based on a repeating melancholy folk-like tune, which becomes more insistent as the movement develops. It does not remain dirge-like, however. For all of the grit in this music, this is an ultimately optimistic work — it feels as if the composer was reluctant to dwell on the Of Weeping title for too long in favour of making music about overcoming and emerging from the worst of times. As Spoliansky observed in the final line of his autobiography “I have been a very lucky man”. The final and longest movement very skilfully reprises many of the motifs of the earlier three, a bit like a suite based on earlier musical ideas and it is longer than any of the other individual movements by quite some distance, building to a triumphant climax. I’m a little unsure if the coda really works; as the music seems to suddenly run out of steam which is a bit of a shame in what is a fairly strong work. Thankfully, it is only within the last minute or so.

This disc also includes two shorter pieces: the curtain raiser (literally) is the overture to the operetta My Husband and I and the other of which is a humorous Boogie, spoofing much more serious music, both of which I think would be welcome in any Light Music concert. It seems less likely somehow that the symphony will see many performances, but what a treat to have this spirited performance on CD. Conductor Paul Mann has carved out a successful recording career, focussing on unusual or lesser known works and bringing them to a broad public. Here, in collaboration with the Liepāja Symphony Orchestra, we have a true championing of this music, which reveals another aspect to the prolific composer (indeed some of whose dance band pieces are found in the Library of Light Orchestral Music). The sound quality on the recording is consistently high and the playing from the orchestra is taut and stylish. Definitely worth investigating for those interested in something really unusual. DA