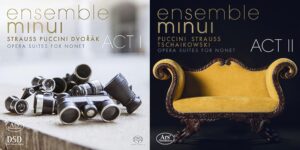 Unusually, I’m taking the step of reviewing two CDs here, as we have two releases that complement each other so perfectly that I can’t imagine one without the other. It is also because I missed the first release completely and only heard about it apropos of reading about the second!

There is no shortage of opera music arranged for lighter ensemble and indeed our own Library of Light Orchestral Music is replete with arrangements, potpourris, even dances based upon themes from popular operas. These two releases represent the first time I have encountered some of the largest-scale orchestral works reduced in such a way: most notably two operas by Richard Strauss: Der Rosenkavalier on the first CD and Elektra on the second, the latter of which deploys one of the largest orchestras in all of opera! It is the Der Rosenkavalier suite that opens the first CD collection, reducing the well known opera suite for the chamber ensemble and I must admit to not having particularly missed the sound of the vast Straussian orchestra throughout. Credit for this must surely go to clarinettist and arranger Stefan Potzmann, who was responsible for assembling all of the arrangements for nonet on both CDs. Unlike the original suite (most likely arranged by Artur Rodziński), Potzmann extends the final waltz slightly before arriving at the coda, so we are left with much more of the heart-on-your-sleeve rambunctious waltz of Baron Ochs before the piece is over. This is followed by a more brief selection from Puccini’s Tosca, mainly consisting of two major arias Vissi d’arte and E lucevan le stelle and beautiful though the suite and reduction are, I would still have preferred a little more music from the opera, such as the Act 1 Te Deum to round off the piece, though I appreciate the challenges in reducing it for nine musicians! The final suite on CD1, however, is the incredibly beautiful and melodious Rusalka by Dvořák, which includes well known sections of the music such as the ubiquitous Song to the Moon alongside other lesser-known but no less attractive music from the rest of the opera.

With the availability of two CDs from this ensemble, I find myself unable to pick a favourite between the two, so it is a joy to be able to recommend both here. The second disc opens with a truly wonderful suite from La Bohème, which, along with the suites from Rosenkavalier and Eugene Onegin, seems to fit the salon music style like a glove. It contains many favourite sections from the opera and, wisely in my view, opens with the tragic music of the finale, before moving backward to a selection of happier music from the opera, closing with Musetta’s Waltz and a brief coda based on the march at the end of Act 2. Evidently a reduction of Manfred Honeck and Thomas Ille’s Elektra Suite, the reduction of the vast orchestra to nine players will raise a good few eyebrows, but it is, once again, testament to Potzmann’s arranging prowess that the reduction works spectacularly well. It is, of course, a much heavier and more extreme piece than any of the other suites on either CD. The second collection is rounded off superbly by a suite from Tchaikovsky’s Eugene Onegin. Often produced in the world’s largest opera houses, Onegin was actually intended for much smaller productions, the first being entrusted to students of the Moscow Conservatory. The reduction therefore, embraces the composer’s wish for simplicity in the work, whilst sacrificing none of its emotional power. I was a little surprised that the Act 3 Polonaise was omitted, though it does not effect either the cohesiveness of the suite, nor its brilliance. Aside from the Strauss reductions, the other suites seem to be entirely produced by arranger Stefan Potzmann and both albums are a true credit to him. However, it is not just a showcase for one man. All nine players, according to the liner notes, are musicians who know and work with one another outside of the ensemble and the clear chemistry between them shines through every note they play. At no point (other than perhaps the presentation of the rose in Rosenkavalier, where I did slightly miss the percussion) did I feel that the reductions didn’t amply capture the larger orchestral textures of the composers’ originals. There are truly fiendish passages for the string players in particular, though there is no shortage of virtuosity in any of the parts. In short, this is an exceptional ensemble whose inventive work belongs firmly in the collection of any lover of light arrangements of operatic music and from whom we can expect many more truly great recordings. DA