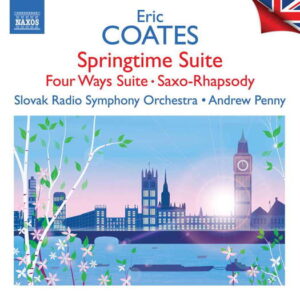 The music of Eric Coates has been a constant in my life, from my early days playing the clarinet in youth orchestras, through college, and then later on when I was in a position to programme it as a musical director. My conducting tutor, Sir Charles Groves, was a fine exponent of Coates and British Light Music in general, so I never had the problems – as some do – with the quality of the genre.

Naxos had asked me to record quite a lot of Light Music in the 1990s as well as more serious symphonic and film music, so it was an absolute pleasure to prepare the scores for this disc to be recorded in Bratislava with the estimable Slovak Radio Symphony Orchestra. In addition to the well-known Sleepy Lagoon, marches and waltzes (try the High Flight March which closes the disc; it is an absolute classic of its kind), I was pleased to include the Saxo Rhapsody with the wonderful Kenneth Edge. This is a much-underestimated piece but well-known to clarinet and saxophone players like myself of course; I grew up with the Jack Brymer recording so knew it well.

Coates was the master of the themed orchestral suite, hence London, Four Ways, The Three Elizabeths, Springtime, and so on. The three or four movements within a single title gave him so much opportunity to explore the varying moods and shades of the central idea.

My other recollection of the recording is much shared laughter with the great Ernest Tomlinson who was also in Bratislava to record Haydn Wood after my week had ended. He came to my sessions and was so helpful to me, along with producer Murray Khouri, in achieving the results you can hear today. I took the photo (right) one evening during that busy but happy time. 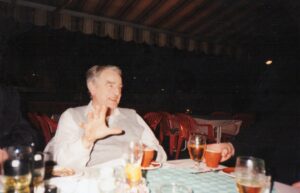