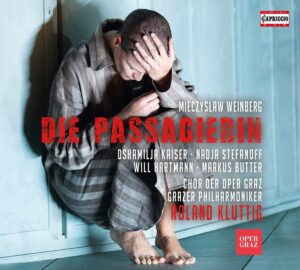 Undoubtedly one of the most important operas of the 20th Century, Die Passagierin by Mieczysław Weinberg (based on the book by Zofia Posmysz), receives its first recording in this CD set from Capriccio. Aboard an ocean ship bound for Brazil, Lisa and her husband (a West German diplomat) are enjoying their cruise, when Lisa spots a passenger she is sure should not be on board. She is sure of this fact, because the passenger is the spitting image of a woman for whose death Lisa was personally responsible. Lisa, it transpires, was a prison guard in the women’s prison at Auschwitz, a history she has hidden from her husband Walter. The story of the mysterious passenger Martha is then told through a series of flashbacks: Martha attempted to stay in contact with her lover Tadeusz, whilst in Auschwitz and their ill fated affair unfolds over the course of two acts before Lisa is forced to reckon with her past. It is never made clear beyond a doubt whether the passenger is actually Martha and she has actually survived the camp after Tadeusz was sent to the gas chamber. The final scene, a monologue from Martha, still leaves these questions unresolved, whilst acknowledging the impossibility of forgiveness for Lisa and her peers for what they have done. Only one message lingers at the end: that we never forget those who were murdered. It is immensely powerful theatre as well as overwhelming musically and, given the subject matter, it is reasonable that the music is uncompromising and doesn’t pull any punches at all. Weinberg was a contemporary of Shostakovich, whom he counted among his friends, so it is unsurprising to find hints of Shostakovich in this opera. Also like his contemporary, Weinberg finds many opportunities to inject lighter music, in the form of waltzes, dance band music and even klezemer (there is an on-stage band in the orchestration) into the proceedings to avoid a sense of total darkness, even if it is light music infused with a sense of grim irony. Bach is quoted directly in the penultimate scene when Tadeusz plays the Chaconne for solo violin (forbidden music) to the Nazi officers in the prison camp, the orchestra first mute and then playing repeated ominous chords capturing rising dread before the violin is snatched from the player and smashed to pieces. Weinberg’s vocal writing is extremely demanding on all of the performers, but the cast execute their roles with flair. Perhaps expectedly, it is Nadja Stefanoff in the role of Martha who is particularly moving, both as the terrified prisoner in Auschwitz and in her closing summation at the end of the work. Markus Butter is also very powerful as the doomed yet courageous Tadeusz. Dshamilja Kaiser, meanwhile, brings out the incredible inner conflict in the character of the former prison guard, combining both vocal menace in the prison scenes and vulnerability in the scenes aboard the ship, though the character seems unable to fully admit her own culpability. There are some highly unforgiving vocal lines in all of these roles and, quite rightly, moments that are not designed to be sung beautifully. This is a fundamentally dramatic piece and the entire cast captures the drama with blistering intensity, even on an audio-only recording. This seems to be a live recording from Oper Graz and it is worth saying that it isn’t the biggest house in which to produce a piece that calls for an absolutely enormous orchestra, as this does. The consequence is not that the orchestra ever plays any less than brilliantly under the ever-reliable baton of Roland Kluttig, but the acoustics just occasionally sound slightly flatter than one might like. When it comes to recommending this set, however, I have no reservations at all – it is a work and performance that is an absolute must-hear. DA