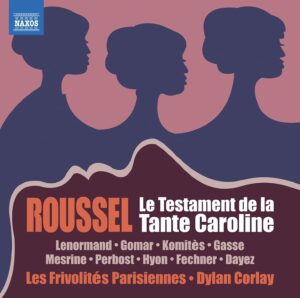 Among a host of re-releases, this little-known gem may have slipped beneath a few radars and I must admit that I was completely unaware that the French composer Albert Roussel (famed for his symphonies and tone poems) had written an operetta. Originally in three acts, it was written between 1932-33 and revised into a one act version in 1964 by Marcel Mihalovici. It is the latter version presented by Frivolités Parisiennes here. It is a giddily farcical story: Aunt Caroline has died and has sneakily included a clause in her will that leaves her entire estate to whichever of her 3 daughters first gives birth to a child a year from her death (one of whom has taken a vow of chastity!). Roussel’s music was once described thusly by critic Bernard Holland “it can bark and growl but in the end wags its tail”. In the case of the operetta, there’s rather more tail wagging than barking and growling, as memorable tunes seemingly flow from the composer’s pen. Very much an ensemble piece, the cast on this recording achieve admirable blend- as a live recording, there is rather a lot of stage noise and the extensive dialogue scenes do become a little shrill at times (but I imagine are hilarious when seen on stage), but the singing is of a consistently very high standard throughout. Because of the the extensive ensemble writing, it is hard to identify particular stand-out performances, so my comment about the blend is intended as the highest of compliments. Completely solo numbers are rare in this operetta, as the drama rests entirely on inter-personal relationships and it is precisely that which the cast achieves as an ensemble. Occasionally, the singers do sound a little distant (a not uncommon feature of live recordings), but they are never overpowered by the orchestra- not a huge ensemble, but playing often densely textured music and a relatively large ensemble for a piece with no chorus. As is becoming so frequently the case with opera releases on CD, there is no libretto provided either in the CD box or online (a constant source of irritation for your humble correspondent!), but there is at least a fairly well written synopsis. I have no hesitation in recommending this to any operetta fan- the audience response in the live recording is clearly enthusiastic, so perhaps we can hope for more performances of this barely-known work in years to come. This CD is a world premiere recording and just goes to show that there are still gems waiting to be discovered! DA