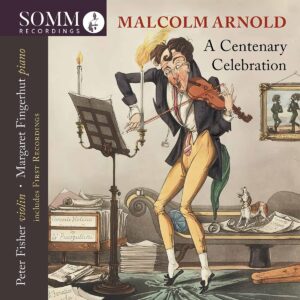 There is an apocryphal tale about a man who visits the doctor because he is depressed. ‘The solution is simple’, says the doctor, ‘go to a performance by the clown Grock and you will soon be feeling better’; ‘But doctor’, replies the man, ‘I am Grock’. Thus a casual acquaintance with Malcolm Arnold’s popular works and film scores like Hobson’s Choice or St Trinian’s may give the impression of an affable buffoon or playful scapegrace; the carousing of the bon vivant nevertheless tempered with a little bittersweet reflection, to which the sets of English and Scottish dances attest. When describing the overture Tam o’Shanter in the 1967 book ‘Music Tells the Tale’, the authors write, ‘Malcolm Arnold’s music has a gaiety and sense of fun that never seems to desert him’, a view no-doubt reinforced by his participation in the three humorous classical music festivals organised by Gerard Hoffnung in the late fifties. Now, with the hindsight afforded by an abundance of recordings of his life’s work, it is clear that, not only did Arnold’s psyche become more troubled over time (unnervingly evident when listening to the sets of dances in chronological order), but the seeds of this restlessness were present in the more serious early works.

Somm’s celebration of Arnold’s centenary year, 2021, is an overview of stylistically varied music composed between from 1947 to 1965, the lighter pieces being arranged by Paul Harris, David Gedge and Alan Poulton for violin and piano. The performers are the highly accomplished duo of Peter Fisher, violin, and Margaret Fingerhut, piano. In the hands of the latter, the obsessive repeated phrase of the second movement of Violin Sonata No. 1 becomes a soothing mantra, making the violent interruptions all the more disconcerting. Arnold casts his Violin Sonata No. 2 in one continuous movement, whilst the Five Pieces for Violin and Piano were composed as mix-and-match encores for Yehudi Menuhin. The set concludes with a nod towards jazz.

It must have been a daunting task to reduce the idiomatic orchestration of the English and Scottish dances to solo instrument and piano. Particular difficulties include the transcription of the sustained strings in Scottish Dance No. 3, the string tremolos in English Dance No. 3, and the tabor-imitating side drum of No. 5. There is an error in the numbering of the five English Dance arrangements; track 17 is no. 6, track 18 no. 1, track 19 no. 3, track 20 no. 7 & track 21 no. 5.

The remaining items include the Hobson’s Choice Suite, framed by the galumphing main title, and the deliciously melancholy Sarabande that was composed along with a polka to flesh out the English Dances to form the ballet, Solitaire. Worthy of note are two film themes that one could be fooled into thinking are from the repertory of seaside palm court days: Lola’s Theme from Trapeze and Madrigal from The Chalk Garden. Here Peter Fisher’s warm romantic violin betrays his Czech School lineage as a pupil of Jaroslav Vanacek. Jim Cooke