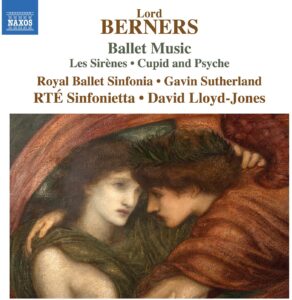 It isn’t just the Marco Polo light music series being re-released currently, it would seem! Two ballet scores here are preceded by a 30 second Fanfare to music itself, written (presumably with tongue firmly in-cheek!) for Saint Cecelia’s day in 1931 by Sir Gerald Hugh Tyrwhitt-Wilson, 14th Baron Berners, better known as Lord Berners. It is the briefest of appearances from former LMS Chairman Gavin Sutherland, but a welcome one nevertheless, featuring all the wit that the music requires. The main work on the disc is the ballet score Les Sirenes, which would be Berners’ final ballet score. It was written for Saddlers Wells, it would reunite collaborators Berners, Frederick Ashton and Cecil Beaton, who had collaborated previously. While only a moderate success upon its premiere, the music has consistently and rightly been praised for its high quality. Nowhere to be seen is the avant-garde influence of Berners’ earlier music, just a succession of extremely well orchestrated tuneful episodes, tinged with the composer’s penchant for humour and eccentricity. Twice a voice is added to the otherwise instrumental score and mezzo Miriam Blennerhassett filling what is really a contralto role is a real highlight of the recording, navigating the almost hilariously low vocal lines with great aplomb! Also featured is a suite from the ballet Cupid and Psyche, which had also been composed for choreographer Frederick Ashton. Similarly melodious, the atmosphere is rather more romantic than etherial here, but showcases a level of energy and exuberance typical of many Berners works. The orchestra captures both the heady mystique of Les Sirenes and the verve of Cupid & Psyche and are to be commended, along with conductor Lloyd-Jones in showcasing these most unusual works. Light Music fans will find much here to tickle their fancy, as will those interested in ballet music that is perfectly suited to a concert setting. Hopefully this re-release will further make the case for these works and let’s hope we can hear them in concerts sometime. DA