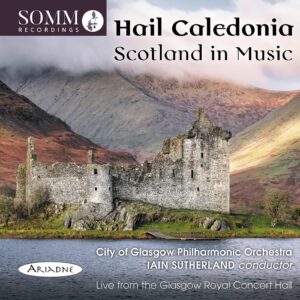 Recorded in 1995–6, this lovely celebration of Scotland in Light(ish) Music has seen a handsome re-release from SOMM records. I attach the suffix “ish”, as there are also some superb classical ‘lollipops’ included along the way including the Scherzo from Mendelssohn’s “Scottish” Symphony No. 3, Granville Bantock’s Kishmul’s Galley and Malcolm Arnold’s Four Scottish Dances. The tracks on the present release were recorded live in the Glasgow Royal Concert Hall and there is clear enthusiasm in the audience’s applause on some tracks. There is a superb performance of Ernest Tomlinson’s Cumberland Square, otherwise only to be found on the Marco Polo release of the composer’s music and it is a very welcome treat to have such a well-performed rendering of the work especially on a remastered disc. Another highlight is Alexander Campbell Mackenzie’s Benedictus. Originally written for violin and piano (and premiered by Lady Hallé), the version included here is for small orchestra. It is a beautiful work and demonstrates the extent to which Mackenzie has been neglected in recent years, despite enjoying considerable success in his lifetime. Aside from his expert conducting of the orchestra, maestro Sutherland has also arranged several stirring Scottish tunes for this CD including The Black Bear Salute, The Flower of Scotland and Amazing Grace, all of which feature Iain Macdonald on bagpipes and the latter of which briefly quotes what sounds to me like another Scottish melody Johnny Faa as a counterpoint to the main melody. Music for the small screen features here as well with theme tunes for Take the High Road by Arthur Blake and, appropriately enough, Sutherland’s Law (actually titled Land of the Mountain and the Flood) by Hamish McCunn, also arranged by Iain Sutherland. And so to Light Music, in which we encounter Maestro Sutherland as composer as well as conductor and arranger, just adding to his bewildering array of talents! Three Scottish Castles is Sutherland’s tribute to Scottish landmarks, capturing in romantically inflected Light Music the sweep of Scottish vistas, replete with masterful orchestration and superb writing for orchestral piano in the first movement. The middle movement features even more of a romantic sweep, while the third is an extremely hummable evocation of Edinburgh Castle, which is worthy of Eric Coates at his very best (albeit with distinctly Scottish flavour!). Coates himself appears on the CD as well with the middle movement from his Three Elizabeths Suite: Elizabeth of Glamis. As one might expect from music designed to instil a patriotic swell in the heart of many a Scot, these are extremely spirited performances and, under Sutherland’s expert direction, nothing is out of place. At times, it is surprising that the recordings are live, as barely a noise from the audience is detectable until the applause. Highly recommended to Scot and non-Scot alike! DA