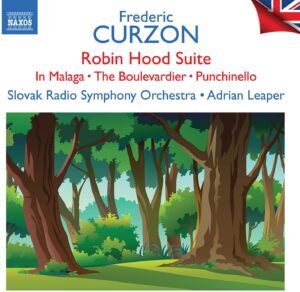 Among the Light Music halls of fame, one sometimes finds that Frederic Curzon is a somewhat neglected figure. The neglect is emphatically not deserved, as Curzon firmly belongs among the ranks of Coates, Farnon and Tomlinson in terms of the sheer quality of his musical output. According to the composer’s stepson Donald Curzon, part of the reason for this might be Frederic’s own modesty in regard to his own talents. By the time he was 20, Curzon senior was a musician who had already established his own orchestra and was making a living accompanying silent films, but later turned his attentions to theatre organs and became an early champion of the electric organ in the 1920s. The present CD opens with one of his most enduring works The Boulivardier, with its masterful evocation of gentile Parisian life. His interest in music from other countries manifests in his Spanish Suite: In Malaga, which, the liner notes point out, prompted a letter from Spain demanding to know if the composer was actually Spanish himself. As it happened, the composer had spent very little time in Spain (if any). For me, personally, it is the stand alone works that stand out on this CD, with one particular highlight being Saltarello for piano and orchestra, boasting a virtuosic performance from Silvia Cápová. While I have had occasional reservations about Leaper’s direction of the Slovak orchestra, they seem downright inspired by Curzon’s music, bringing out the wit of Dance of an Ostracised Imp or Galavant alongside the elegant harmonic inventiveness of Pasquinade and the beauty of the Maid Marian section of the Robin Hood suite. This is Light Music of the highest quality and deserves its place in the pantheon of important works of the “genre”. If only a friendly music library had a ton of this composer’s music they could lend to your orchestra…oh wait! DA