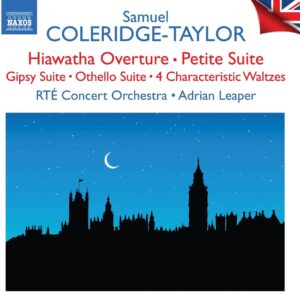 The re-release of the one time series of British Light Music formerly published by the Marco Polo label ought to provide a much needed rekindling of interest, from the listening public, if not a bit of a reassessment of music that has been too long neglected by the majority of the critical establishment. Once upon a time, Samuel Coleridge-Taylor’s Hiawatha Trilogy was the hottest ticket in London, said to have out-performed Handel’s Messiah at the Albert Hall for a good few years. Performances often involved flooding the hall’s arena so that musicians could sing whilst on sailing boats in such stagings. The Hiawatha Overture, which opens this CD was composed after the premiere of Hiawatha’s Wedding Feast, the first in a trilogy of cantatas. The whole trilogy plus this overture, which quotes from the spiritual Nobody Knows de Trouble I See were performed in Birmingham in 1901. It is a terrific curtain raiser and the orchestra conducted by Adrian Leaper do a superb job in capturing the atmospheric opening. The more dramatic sections, however, occasionally lack the punch I would have liked, to the extent that they at times sound a tad listless. The overall balance may contribute to this- one can notice the brass counter-melodies cutting through rather intrusively over the main string lines. It is, despite reservations about the performance, a wholly satisfying work. What is really on display on this disc is what makes Coleridge-Taylor such an interesting composer: his easy fusion of styles. The way the composer weaves Negro folk melodies into a western orchestral textures is well documented of Hiawatha, but the ease with which the he also adapts to European and popular forms of the time prefigures a lot of what, post Coates, would come to be known as Light Music. Highlights include the second movement of his Petite Suite de Concert and the middle movements of his Characteristic Waltzes. Further musical fusions come with his Gypsy Suite, tapping into a musical craze at the time, as well as dramatic incidental music for Shakespeare’s Othello. As mentioned, the more dramatic sections of the music seem to want a little more heft and one is left thinking that a more daring conductor might bring something quite different to this music. As it is, however, we have a reliable pair of hands in Adrian Leaper, who delivers polished performances from the Irish orchestra, which are consistently engaging and often highly entertaining. DA