My Cutey’s Due At Two To Two Today 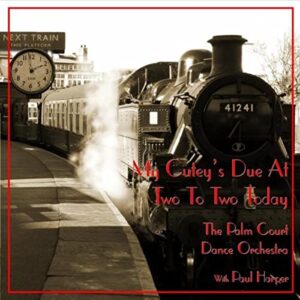 The Palm Court Dance Orchestra is based in Yorkshire and was formed in 2001. The orchestra specialises in the unique sounds of the 1920s and 1930s with its combination of strings, saxophones, and rhythm section. During the last 30 years, they performed at events throughout the north of England, including The Midland Hotel at Morecambe, Stockport Plaza, Haworth 1940s Weekend, Cleethorpes Light Railway 1940s Weekend and Pateley Bridge 1940s weekend.

Here we have their second CD (their first was recorded and released in 2005). This collection was recorded between 2011 and 2012, and contains 21 tracks, mostly songs from the 1920s, 30s and 40s. The instrumentation used on this occasion is 3 violins, 4 saxophones, piano, bass and drums.

The vocalist Paul Harper appears on 15 of the tracks. Paul has been entertaining 1930s and 1940s style for many years and appeared in the major motion picture Atonement. He has worked as an international cabaret artiste in the UK, Holland, France and Belgium. He regularly entertains every year at the War and Peace Show at Beltring in Kent; Bussum Bridgehead, Holland; Severn Valley Railway; Peak Rail; East Lancashire Railway and many other WW2 weekends in the UK and Europe.

The title track, My Cutey’s Due At Two To Two Today, an example of the ‘train song’ genre, was written by Leo Robin, Albert Von Tilzer and Irving Bibo, and was first recorded on May 7, 1926. It speaks primarily of faithfulness in one’s lover’s absence and of the giddy anticipation of reunion.

Paul Harper is a big fan of Al Bowlly and likes to imitate his style. This is heard in many of the tracks in this compilation, notably Roll Along Prairie Moon, Isle of Capri, Bei Mir Bist Du Schoen, My Hat’s On The Side Of My Head, Down Sunnyside Lane and Lying In The Hay.

The Glory of Love was written by Billy Hill and first performed by Willie Bryant and his orchestra. Benny Goodman also recorded it the same year. It is played here in an arrangement by Gordon Rees, published in 1936. (This arrangement is in the LMS Library).

In the Gloaming, By the Fireside (Noble, Campbell & Connelly) was published in 1931. According to the sheet music of the version performed here (arranged by Frank Skinner) it is “the Prince of Wales’ New Favourite Song”.

Other tracks featuring Paul on vocals include Button Up Your Overcoat, I Saw Stars, Steppin’ Out with my Baby and After You’ve Gone.

The track Diamond Waltz, instrumental only, is not an original from the period, but was specially written in 1920s style for one of the orchestra members in 2005. Other purely instrumental tracks on the CD are Little White Lies, My Sweetie Went Away (She didn’t say where, when or why), Dancing Time, Enjoy Yourself and Tea for Two Cha-Cha.

The final track, Auf Wiederseh’n, Sweetheart, is a song written by German composer Eberhard Storch. (The obvious choice of Goodnight Sweetheart had been used by the orchestra as the closing track of an earlier CD). Storch wrote the song in the hospital for his wife Maria as he was ill for a long time. It was originally sung in German by Rudi Schuricke and released by Polydor in 1950. This song appeared in the first ever UK singles chart sung by Vera Lynn in November 1952 and peaked at number 10. It performed rather better in the USA becoming a number one hit there and was also the first ever number one single in the USA not performed by an American.

This disc is available to purchase from musicbyarrangement.uk/compact-discs/, also from the orchestra’s website at palmcourt.org.uk. It is also available as a digital download from Amazon Music.